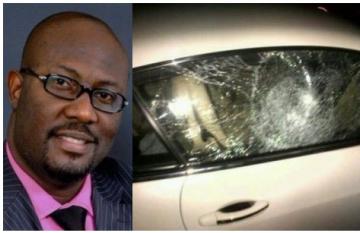 Melaye, who has not stopped thanking God for sparing his life over the purported attack that left the wind shield of his Bentley car badly shattered, expressed indignation over the alleged cold response by the Police at the check point when he approached them for help.

According to him, it was the FCT Director of the Department of state security and an Assistant Commissioner of Police that came to his rescue.

Giving account of what transpired that Monday night, he said: “Basically, I was coming from the National Hospital and I noticed shortly after the bridge before the ICPC, a certain black Golf car which got close and overtook me in a very dangerous manner.

“I had to stop for the car to drive far ahead before I continued. Shortly after ChurchGate Building I noticed the same car from afar parked by the end of the road with all the four doors opened and there was light inside but no one was inside.

“At that point, I ran to the next police checkpoint. I told them to make a radio call that I had just escaped an assassination attempt and that the assailants were in a Golf car and that they should block all routes.

“Unfortunately, the police said where the incident happened was not their beat. I said you are a federal police, okay, make a radio call that this is the complaint so that the police around there can cordon that area off, but they did not.”