I Am Not Dating Adams Of Soundcity – Chidinma 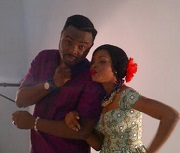 Speaking recently in an interview with STV Lagos, Chidinma Ekile debunked the rumour of a romantic relationship between her and the former Next Movie Star contestant, Adams.

Miss Kedike crooner said nothing went on between the two of them as reported in the media. Chidinma said she decided to keep calm on the issue for a long time because she was enjoying the hype the news was giving her.

“I am getting used to such news, it is part of the job, but nothing of such happened between us,” the former MTN Project Fame winner said on Entertainment Weekly show on STV.

Fast-rising Nigerian singer, Afeez Fashola popularly known as Naira Marley has fumed that the Nigerian government is creating conditions for problems. According to the singer,...
Read more

Controversial journalist, Kemi Olunloyo has spilled more about the drama between Peruzzi and former boss, King Patrick by stating that the Entertainment boss rented...
Read more

Popular comedian, Broda Shaggi has hilariously reminded 2019 Big Brother Nigeria winner, Mercy of the N3500 she borrowed from him. It all started after the...
Read more
- Advertisement -