Skipper Joseph Yobo has said that Coach Stephen Keshi cannot make him a part-time player in the Super Eagles. He opens up on can of worms in this interview with STV on Wednesday. 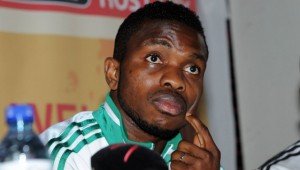 Before people get it twisted, I said and I repeat that nobody communicated with me that I was not going to play against kenya. Nobody communicated to me at all. This is not about Joseph Yobo. This is about the position of the captain of the national team and there should be respect for that position.

There are so many things that happened that I was not happy with but I chose to keep quiet. But I am keeping all that for my documentary.

When it happened again and I did not get a phone call, I was like saying to myself , here we go again. It is not like I have not experienced such before , I have, but if it keeps coming, there is only so much that I can take and I had to put things straight.

I am not interested in making trouble with anybody but right now, I’m only speaking out because I have had enough.

The coach, Keshi, said that after the Nations Cup in South Africa, that he had a meeting with you and told you that in subsequent matches that he was going to be calling you for some while leaving you out of others. Is it true?

There is absolutely no truth in that statement. After the Nations Cup, he did not call me to say that some games I will play and some games, I would not play. It is absolutely untrue.

I am on top of my game right now, I am a top of my career and I am playing in the Europa Cup. If I’m not that good, I won’t be playing in this competition. This is not about football. This is about principles. Why is Keshi trying to make a part-time player.?  If that is his decision, fine but I won’t accept and respect that decision, but if he feels that he does not need me and he tells me that, I would respect that decision. But to say that he called to inform me of his plans, no that is not true.

I cannot agree to be a part-time player for the national team. If I’m not fit to play or good enough to play, I personally would opt out. I have a reputation to protect. Nigeria is so huge , we have so much talents and as a player, its difficult to come out there and put your head out for  competition. So if I am not ready and fit enough, I would say it myself.

When you saw this, did you bother to call the coach to clear the air?

No, I feel and believe that the coach as the leader, should be able to call his players.

Vincent Enyeama said that you are still the captain of the team but the coach thinks otherwise, so don’t you see a crisis in the team?

A lot of things also happened at our Faro camp, which people don’t know. But because we are adults, we keep these things to ourselves. These things are not good at all but we allow things to lie low.

Communication seems to be a big problem in the Super Eagles. First, Osaze complained, then Emenike also complained and now you are coming out to complain. Everybody blamed Osaze for his twitter rage but what do you think is going on?

There is absolutely a communication breakdown in the national team. If you are in a position of authority, you have to take all the responsibilities. A lot of things go wrong in the national team and that’s it. All the time, they seem to sideline the players. Players are supposed to be communicated with, especially after a massive event.

They need to ask how we are getting on in our clubs, has your injury healed, what is going on with your wife but these things do not happen. We go back to our clubs, we do not hear from them. We are like children and we also have children, who look up to us. Can they do so to their children? As I said, there is a real communication breakdown in the Eagles.

Can you let Nigerians know some of the problems that happened in faro first and the Nations Cup because if you want to solve a problem, you need to know what the problems are.

As I said, it’s a lot of and I am saving them for my documentary. We won the Nations Cup, everybody participated to make it a success. The coaches played their roles, the backroom staff also did theirs, the NFF played their roles and the players  also contributed their quota.

As the captain, I never thought I would go through the things that I went through to be able to put the team together. A lot of things happened but we had to put them aside so that we can achieve the victory in South Africa.

But people have forgotten that it was not done by one person.  I have sacrificed and I do not want to see what I am not supposed to see. This is my stand. The position of the captain should be respected and I am saying this because of the future. It is not about playing  because players feel disrespected and ignored if they are not communicated with.

Is it true that you had a disagreement with Amokachi? What is the problem between you and Amokachi

I did not say there is a problem.  You are telling me that but as I said , when the right time comes, I will talk. One thing I know is that I will always stand for the truth. I really do not care about the consequences and who is offended. If they say I should say the truth, I will always say the truth. I have never disrespected anybody in my career.

In my 13 years of professional career, they have never fined me for a day , so that tells you the type of person that I am. So when I speak up, people should understand where I am coming from.

Is it true that you disagreed and made them to share money across board with everybody at the Nations Cup.

Even for the backroom staff, who people did not see but they put in a lot of efforts for us to achieve what we did at the Nations Cup. So it was wise for us to share it equally, even if, it meant that I will take the least, because we are like a family and we are building a team spirit.

Some of the things you are saying now are so similar to what Osaze said, initially though, you said then that he was childish

Osaze is a wonderful person. We spoke recently. I just thought that Osaze presented his case probably at the wrong time and the wrong way.

Yes, certain things that he said are true. Before the away game in Liberia, I called Osaze to let him know that I was aware of certain things which were not going well in the national team but told him that I needed his support as a senior player, we need him and his experience to build this team together. Some of the things he said are very right but like I said, we need to stick together.

I think that he likes it of that is one of his hobbies. But I do not like it and do not have a twitter account because if I go on social media, I have a lot of things to say that would shock people