A former servant at the palace of the traditional ruler of Ogwashi-Uku, Delta State, where the mother of the Minister of Finance, Dr. Ngozi Okonjo-Iweala, was kidnapped has told PUNCH Metro that he gave the kidnappers the necessary information for the job. 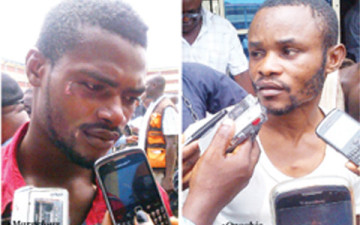 He said, “I’m 32 years old and I worked in the palace from 2007 to 2012 after which I left because the pay was too little. A friend of mine approached me and told me that I could make a lot of money if I gave kidnappers information on how to get into the palace.The suspect, Chiejine Onochie, said although the kidnappers collected N13m as ransom before the 83-year-old Prof. Kamene Okonjo was released last December, he was not given any money and therefore, was not culpable.

“However, after the operation, I did not get a dime. It was later that I learnt that they had collected N13m as ransom. I felt cheated and I left everything to God. I cannot be held for the crime because when police started arresting people, I went to report at the station voluntarily, I was not dragged to the station.”

Another suspect, Jideofor Ogbue, aka Marvelous, who claimed to be the leader of the gang, said after gaining entrance into the palace, he and his gang members did not force Okonjo out of the palace but she followed them willingly after they had told her that they were sent by President Goodluck Jonathan.

The 22-year-old said, “It was my friend, Ifeanyi, that informed me about the operation. On the day of the kidnap, we had no difficulty because Onochie had told us that the security around the palace was lax. Although 12 of us were involved in the operation, only eight actually went to the palace.

“We went with three AK47 rifles and a pump-action rifle. When the woman (Okonjo) saw us, she asked who we were and we told her that President Goodluck Jonathan sent us from Abuja to arrest her because her daughter (Ngozi Okonjo-Iweala) had embezzled public funds.

“We took her to Kwale and her family paid us N13m as ransom. They packaged the money in polythene bags and dropped it around an expressway in Benin. My share was N2m.”

Chukwuma Okoh, a suspect who claimed to be a graduate of Accounting and Finance from Ambrose Alli University, said he joined the gang because of unemployment. He said he was not given any money after the operation.

He said, “I’m 31 years old and I graduated in 2007. Since then, it has been hard to get a decent job. It was Onochie that brought the idea of kidnapping Okonjo-Iweala’s mother.

“However, as God is my witness, I did not receive a dime from the gang after the operation.”

Manko, while parading the suspects, said the suspects were arrested in different states comprising Edo, Enugu, Delta and Anambra.

The police boss said contrary to reports, kidnapping was not on the rise in Lagos.

He said, “Marvelous was arrested in Port Harcourt after he had perfected plans to kidnap the Commissioner of Commerce in Anambra State.

“As you can see, these kidnappers do not operate in Lagos State, they just come and go. You therefore cannot say kidnapping is on the rise in Lagos.”