Former governor of Abia State, Dr. Orji Uzor Kalu, has described the Igbos as third-rate citizens in the Nigerian project. 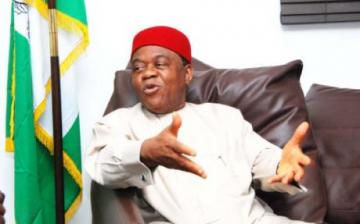 Kalu said rather than being accorded the status other major ethnic groups within the Nigerian project had, the Igbos had been consigned to the background in the scheme of things in Nigeria.

Kalu, who spoke last Thursday at the British House of Commons in the United Kingdom, said the statistics, which formed the very basis of the existence of the country, had glaring evidences that the Igbos, who occupied the South-East part of the country, were not as highly valued as the Hausa and Yoruba ethnic stocks.

He said the statistics, ranging from the distribution of the country’s commonwealth to the opportunities to govern at the federal level and the number of states, local government areas and senatorial districts in each of the geopolitical regions of the country pointed to the value placed on the Igbos by the Nigerian state.

He said: “The Igbo in Nigeria have become the receptacle of anger, hatred, envy and frustration oozing out of their fellow compatriots. But this is on the level of the transaction between private citizens.

“How about the place of the Igbo in respect of the manner in which public affairs are conducted by the Nigerian Federal Government and its agencies? The simple answer is that the rain has continued to beat the Igbo.”

To back up his argument, Kalu told the gathering, which included Nigerians in the Diaspora, especially those based in the United Kingdom, that while the South-East had just five states, other geopolitical regions had between six and seven states. Specifically, he said the North-West had seven states while others had six. In terms of local governments, the South-East also had the least 95.

Kalu said: “The above table does not represent an opinion or a hypothesis. It represents the blatant reality of the third rate status forced upon the Igbo in the political space in Nigeria.

“We, the Igbo, have striven but thus far failed to persuade the Nigerian establishment about the hurt and humiliation and deprivation that come with the idea that we, as a people, are legally condemned to third rate status in our own country, as amply demonstrated by the above table.

But for the South-East, leading the country had only been for six months and 13 days. Kalu added: “The structural disparities are constitutionally entrenched (please see the constitution of the Federal Republic of Nigeria, 1999), thus their grave implications for Ndigbo are beyond the primary questions of inequity and marginalization.

“The histories of nations are replete with evidence of existential threat to any group whose marginalization is made a subject matter of constitutional enshrinement.

“With unequal voice in the Federal Executive Council, in the National Assembly, on the federal judicial benches and a vast array of other fora in which the Igbo suffer sub-parity representation, the strength of the advocacy of our problems and priorities is thus diminished. Little wonder, then, that the South-East zone, the area inhabited by the Igbo, still manifests the physical characteristics of a conquered and occupied land, 43 years after the civil war.

“Quite apart from the psychological assault it represents for Igbo people, the practical issues of unequal representation and unequal allocation of resources are calculated to retard the development of our region and our people.

“The massive difference, which the resources and human empowerment that we are denied might have made in our society, is something that calls not just for a sober reflection but a gritty resolve to bring about their speedy resolution.

“The Igbo tenacity, drive and relentless optimism to pursue life’s enduring dreams of family, faith and success and to overcome life’s challenges will see them through. But the world must listen to them whenever they cry out. For they have long suffered and endured in silence, as the rain continues to beat them.”

Kalu said this was the major reason for the formation of Njiko Igbo, a group with the mandate to push for the election of a president of Igbo extraction for Nigeria in 2015.

He said: “The presidency of the Nigerian nation has not eluded the Igbo by accident or by an act of divinity but by human design; and it is through human pressure that we can attain it. Njiko Igbo is the catalyst and conduit for our collective action. We trust that you recognise, as we do, that power concedes nothing without a demand….

“Njiko Igbo is an organisation dedicated to the struggle for the ascent of a citizen of Igbo extraction to the presidency of the Federal Republic of Nigeria in 2015.

“We are fully committed to the security and peace of our nation, and to the comradeship of a common justice and equality for all Nigerians.

“We are neither supportive of nor opposed to any political party or the aspirations of any individual politician.”