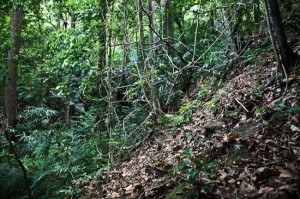 It’s truly amazing when we get to cover news of people who single-handedly create something truly significant. Churches on a mountain side, for instance. Or in this case, an entire forest. Jadav Payeng, a man in his mid-fifties, has been instrumental in converting a sand bar in the middle of the river Brahmaputra in Assam, India, into a huge forest. His work of the past 31 years is being recognized by tourists and film-makers, the world over.

Mulai, as Jadav is known among locals, started work on the land in 1980. A scheme was launched at that time by the social forestry division of the district, involving the planting of trees on only 200 hectares. The project was completed after 5 years and all the laborers left, except Mulai. Dedicated to the forest, he stayed on and single-handedly looked after the trees, continuing to plant more of them. Eventually, the forest expanded to 550 hectares. According to Assistant Conservator of Forest, Gunin Saikia, this is perhaps the world’s biggest forest in the middle of a river. Mulai says there’s potential to extend this even further to 1000 hectares. Inspired, the department has planned to launch another plantation program this year.

The Assamese name given to the forest is “Mulai Kathoni,” meaning Mulai’s forest. It is home to several thousands of varieties of trees. Bamboo alone covers about 300 hectares. And it’s not just the plants, there’s wildlife living in there too. There are about four tigers, three rhinos and more than a hundred deer, rabbits and apes. There are innumerable varieties of birds who call this place home, as well. A herd of about 100 elephants is known to visit the place every year for six months. Mulai Kathoni has attracted several visitors so far, including British film maker Tom Robert.