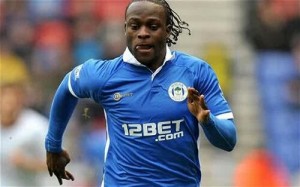 There was a time when I found this quote, and its sister-”Behind every cloud lies a silver lining”- very annoying. As far as I was concerned, they made no sense whatsoever. And anyone who attempted to make me feel better using them only made the situation worse.

How can a disappointment be a blessing? I mean the very fact that it’s called a DIS-appointment means there’s nothing good about it. How is losing one’s job a blessing and what good could possibly come from losing a loved one?

I followed this train of thought till it dropped me off at Victor Moses’ doorstep. Why Victor Moses, you ask? I read his biography recently. I heard he lived in Kaduna for a while and since we have this in common, I decided to read up on him and know his life’s story.

Victor Moses lost both his parents at the age of 11. His father was a Pastor and as such his parents were targets during the Kaduna riots of 2002. They were killed while young Victor was out playing football in the street. He was to be the next target but he was hidden by friends and then taken to England as an asylum seeker.

Then a thought crossed my mind. What would’ve happened if Victor’s parents hadn’t been killed? What would have happened if he hadn’t had to move to England? He would’ve grown up in Kaduna, lived a regular life and Victor Moses the soccer superstar might have never existed.

Then I thought of Malala Yousafzai, the 15 year old Pakistani girl who took a bullet to the head because she believed that girls also deserved to be educated. She spoke up about her beliefs and she almost lost her life for it. Malala’s shooting brought international recognition and because of her, many Pakistani girls will have the chance to be educated.

She and her family were also relocated to the United Kingdom and they now have a better life than they could have ever hoped for. What if Malala hadn’t gotten shot? She and her family would still be struggling in Pakistan and there would be no hope of improved education for the Pakistani girl child.

At this point I realized that these quotes hold a world of truth. Every disappointment truly is a blessing but this doesn’t necessarily mean it would be a blessing to the disappointed party. Behind every cloud, there really is a silver lining but this just means that where its cloudy for you, someone else is seeing the silver lining.

Think about it. Every time something bad happens to a person, it translates to something good for someone else. It rains and you get soaked and complain but the farmer is rejoicing. If you don’t get a headache, how will Panadol sell? If your car breaks down, it’s business for the mechanic and the tow truck. If the undertaker’s children must eat, then someone must die.

The world is about give and take. It’s the natural course of the earth and we are powerless to stop it. We take from the earth in life and we give back to it in death. It’s called the circle of life for the same reason that the earth is round.

You can’t be the only one benefiting from your life. You are meant to share of yourself until it goes round. This is why the world revolves round, picking the bad from one person’s doorstep and making it good for another.

The fact is that we have been placed on this earth for a purpose beyond ourselves. We are here so that we might enrich not only our own individual lives, but the lives of others as well. Even if this means that we have to unwillingly sacrifice our happiness so that they can be happy.

Victor Moses and Malala Yousafzai each made such a sacrifice. They went through unimaginable pain so that millions of people around the world could be happy. They lost so others could gain.

It’s not easy to live a life of sacrifice, especially when life demands that sacrifice of you by force. But there are few things more rewarding than seeing a smile on someone’s face and knowing you’re the reason it’s there. I’m sure Victor and Malala would agree.