Bishop of the Anglican Communion, Kaduna Diocese, Dr. Josiah Idowu-Fearon, has said the inter-religious conflicts in Nigeria are causing a huge setback for the development of the country.

He said the disaffection between religious faiths led to disaffected and alienated minorities, oppression, revolutions, civil wars, and the frustration of all attempts to build a human society.

He spoke in Lagos at a conference organised by Muslims’ Rights Concern, with the theme, ‘Citizens’ Rights and Nation Building.”

In his paper titled ‘The Rights of Christian Minorities in Muslim-Dominated Areas of Nigeria: Final Thoughts,’ the archbishop said inter-religious crisis occurs when communication breaks down between followers of different faiths.

Idowu-Fearon, therefore, urged Christians and Muslims to compete in doing good to one another. He advised that they should not see one another as enemies.

The Bishop said, “God could have made us all one community. But, He has not done so in order that we might compete with one another in doing good. It is only in the field of trying to outdo one another in good works, in exercising our stewardship on earth, that competition among religious communities finds validity.”

He said the rights of minorities in different parts of the country must be protected, while conflicts must be addressed through dialogue.

The Director, MURIC, Prof. Is-haq Akintola, also called on the international community to assist the Federal Government in its amnesty programme for Boko Haram. 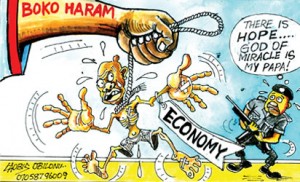 He noted that peacemaking was cheaper than war, adding that Nigeria must avoid creating a self-imposed humanitarian disaster in the West African sub-region.

He said, “We also urge all men of goodwill to prevail on the Christian Association of Nigeria and the Movement for the Emancipation of Niger Delta to realise the enormity of the issues at stake and pursue a peaceful solution in the interest of our children and generations yet unborn.” [Punch]