Home Metro News It is uncalled for and evil for anyone to want to mix...
Facebook
Twitter
WhatsApp 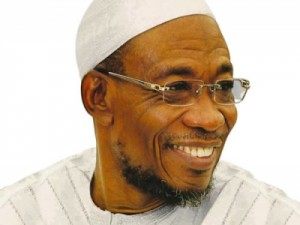 Osun State Governor, Mr Rauf Aregbesola, has restated his administration’s opposition to the imposition of any religious faith in the state.

Governor Aregbesola made this disclosure during the 2013 Easter service of songs held by the Apostolic Faith Orchestral choir at the state Government House Oke-fia, Osogbo. He noted that the issue of religion and salvation were personal and not an avenue to make life inconvenient for others.

According to him, “In my own family, I have brothers and sisters who are Christians and that in no way affects our relationship. Religion and salvation are personal which you need not use to inconvenience others… It is uncalled for and evil for anyone to want to mix politics with religion. This is what some mischief makers who have been rejected by the people are trying to use to cause disaffection among our good people.”

He held that both Christianity and Islam agree on the supremacy of one God, and the birth and ascension of Jesus Christ and queried the disaffection among believers of both faiths: “I as a Muslim is desirous that when the trumpet sounds, I will be among the righteous to be raptured. We even have in the Quran the name of the angel who will blow the trumpet, it is in the Quran that at the first sound of the trumpet, every living thing will die, at the second sound, all the dead will rise and at the third sound, judgment shall take place.”