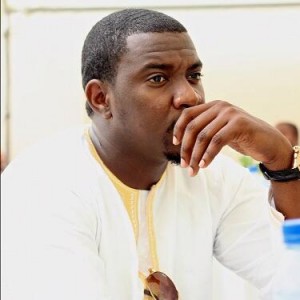 John Dumelo recently starred in a movie, One Night in Vegas, which was produced in the USA and featured Harrinia Alexander Dembele, a US-based nurse, model and actress.

John Dumelo is still battling fiercely with a rumour circulating of him and Harrinia walking down the aisle secretly to fulfill the order of matrimony.

Last week, several blogs reported that the Ghollywood star had settled down with a nurse, Harrinia, but Dumelo took to Twitter to deny the reports.

And the diva Harrinia Dembele joined in the war, declaring on her Facebook timeline, “It’s funny how media hype things up.. I am not married to this guy. We did a movie together. But I don’t even know how they spelled my name on this fake stuff…”

You should see the movie!!!!