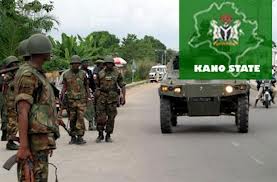 In an unprecedented move, the Joint Task Force in Kano yesterday described the killing of a suspected bomber near the palace of the Emir of Kano as a worthy step in the fight against insurgents’ activities in the state.

JTF spokesperson, Capt. Ikedichi Iweha, who addressed newsmen, said it was time people realized that the fight against terrorism was the responsibility of all.

According to him, two insurgents arrived the vicinity of the Kano Central Mosque aboard a tricycle after Isha’i prayers and planted an explosive device about 10 metres from the mosque’s fence.

“The device exploded, but as they were trying to get away from the scene, people came out and gave them a chase. They killed one of them and set fire to his corpse,” he said.

Iweha further added that security agents arrived the scene just as the second suspect was making to escape and shot him in the leg, but he died of the gunshot wound later at the hospital.

“People should be bold enough to confront these terrorists whenever they come to wreak havoc and apprehend them. If such efforts continue, Kano will become peaceful in no time, because the  terrorists will find the environment difficult to operate in,” he said.

The task force also appealed to members of the public to provide information to security forces for crimes to be checked.