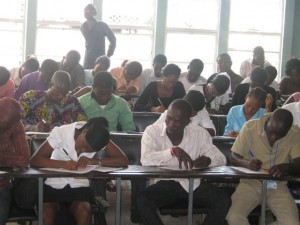 The Chief Judge of Lagos State, Justice A.A Philips, has encouraged prison inmates to sit for examinations, such as the West Africa Senior Secondary Certificate Examination (WASSCE) and Unified Tertiary Matriculation Examination (UTME) while serving jail terms, as being imprisoned does not deter them from sitting for such examinations.

Justice Philips, represented by the chief registrar of the Lagos State Judiciary, Mr D.A Safari, made this statement at the launching of an educational facility centre tagged “Prison Knowledge Centre (PKC),” donated by the Zaccheus Onumba Dibiaezue Memorial Library (ZODML) group, at the Ikoyi Prisons in Lagos, recently.

According to him, “You can live a good life even after leaving the prison, and this can be achieved when you develop your mind while here, which is by reading. Grab the opportunity to read and study, you may even write national examinations, such as the WASSCE and UTME and even proceed to the higher institutions, such as some of your fellow inmates, who are presently students of the Open University.”

He added that the prisoners needed to positively develop themselves while serving jail terms, as that was the only way they could easily be reabsorbed into the society on gaining freedom. The deputy controller of Prison in Charge, Mr Bamidele Olanrewaju, also solicited government support for prisoners, who have creditably passed the Unified Tertiary Matriculation Examination (UTME) and West African Senior Secondary Certificate Examination (WASSCE) to study in their university of choice.