Home Entertainment Kardashian Is Still Working Out In Gym… At Six Months’ Pregnant
Facebook
Twitter
WhatsApp
It seems that Kim Kardashian is trying to keep the pounds she gains while pregnant to a minimum. 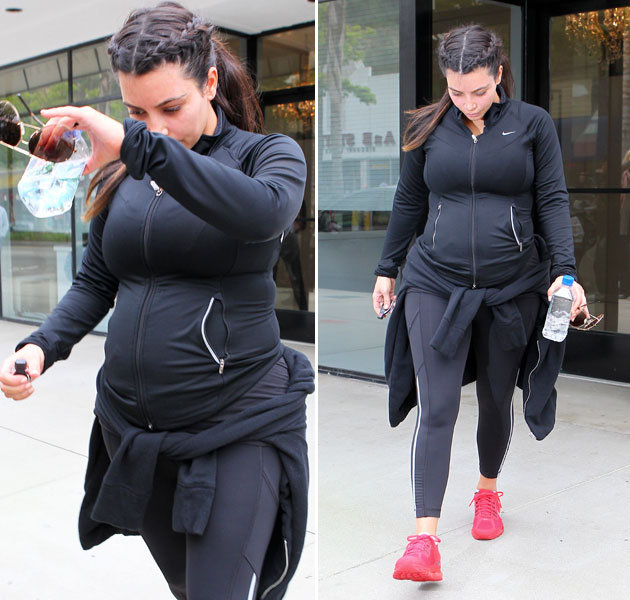 The reality star was snapped leaving a gym yesterday, showing off her swelling physique in the process.

She wore trainers, tight jogging bottoms and a figure-hugging vest. Kim – who’s expecting a child with boyfriend Kanye West in July – kept her eyes hidden behind shades but wasn’t so coy about her cleavage.

Her latest workout follows a hospital dash last month after she fell ill on a flight from Paris to Los Angeles. The socialite’s health scare sparked fears she was overdoing it on the exercise front – and doctors reportedly advised her to cut down on trips to the gym. It’s claimed Kim is so worried about piling on weight, she’s planning to undergo a tummy tuck after giving birth to help get her back into shape.

Her aunt Joan recently revealed: “She can have a tummy tuck, which will take care of most of her weight fears.“The family’s trying to convince Kim to relax and worry about losing the weight months from now.”
Meanwhile, it’s been reported that Kim has been forced to admit that she spends more time away from rapper Kanye than she does with him. She made the confession in a deposition that forms part of her divorce from estranged hubby Kris Humphries, according to RadarOnline. A source told the website: “She blamed their hectic schedules, but it was obvious that it pained her a great deal.

“Kim is pregnant with his baby, and Kanye is missing all of her prenatal appointments, because he is halfway around the world in Paris.“Kim and Kanye talk, text and Skype, but it’s not the same as having him physically with her.” Kim’s divorce trial with basketball ace Kris – who she was infamously married to for just 72 days – kicks off on May 6.

And Kris has reportedly slammed his ex’s tell-all interview with US presenter Ryan Seacrest – which is due to air on TV two weeks before the split pair face the judge.
The sports star apparently thinks it’s a desperate attempt on Kim’s part to limit the damage that their legal showdown will cause.
A source told RadarOnline: “Kris is very suspicious of the timing. “In Kris’ opinion, it’s definitely being done as damage control before testimony in the divorce trial, which is expected to reveal that aspects of Kim’s reality shows are staged. “Kim will be forced to testify under oath that scenes of the reality show, including a conversation she had with mum about the breakdown of her marriage to Kris, took place after she had filed for divorce.”