Mrs Theresa Onuoha, travelled to her village from Lagos for the annual August meeting in her brand new SUV. 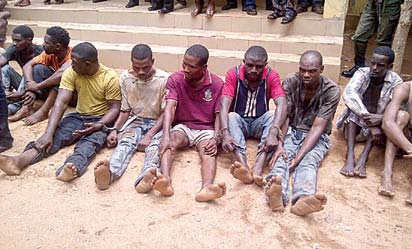 August meeting is very popular  amongst women from the South East and to many of them based in the cities, it is a period to show off the wealth they acquired abroad and so, throughout the period of the meeting, Madam Theresa was always expensively dressed, displaying her wealth in clothes and jewelries.

During one of  the meetings, she received a disturbing phone call from Lagos and urged one of her nephews to drive her to the airport for an emergency return to Lagos.

But fate lurked on the way as the SUV purred along the highway. A  Fore-runner jeep overtook her and swerved to block her. Madam Theresa was kidnapped and was not seen for two weeks. Before she could get her freedom, her family parted with N5million and her husband who had a weak heart was in a bad condition.

It took contibutions from friends and relations to fly him overseas for surgery and ever since, the family decided to bid temporary goodbye to their South-East country home.

But in Ejigbo Lagos where the family lives, the kidnappers have recently reared their ugly heads with the kidnap, most recently of Ejigbo Council boss, Kehinde Bamigbetan.

A distraught  Mrs Onuoha lamented to Saturday Vanguard, “ what is the meaning of all these? What have we done to deserve these? Are they now following me everywhere after we have abandoned our village because of them?” Mrs Onuoha and her family live in the same neighbourhood with Bamigbetan.

Two years ago, Chief  Lawrence Oragwu, a retired Deputy Comptroller of Customs left his Lagos abode to his village in the South-East where he was also a traditional ruler .  His  wife and children were in Lagos awaiting his return but he never did. He was going to Church on Sunday after arriving the village when a Sports Utility Vehicle drove in front of him, blocked his way and four heavily armed men reportedly alighted and pushed him into their own vehicle and drove off.

The kidnappers pushed away his driver who eventually reported the case to the police and since June 2011 when the kidnap took place till date, nothing was heard of him and investigations have yielded no results.

The last time his wife travelled to the South-East, she too, narrowly escaped from kidnappers and the family has made Lagos a safe-haven. But that safe-haven is now being invaded  by evil men.

It is no news that the menace of  the hydra-headed kidnapping monster has found its way into the state of “Excellence”, Lagos, which harbours over 21 million people, but what  is alarming  is the rate at which the act is being perpetrated without clue so far , from  the state police authorities .

The act, which predominately operates in the South-South and South East regions of the country, has become a thriving venture for those who dared to engage in the illicit act in Lagos.

Like  nocturnal predator animals, with AK-47 assault riffles available, kidnappers, now hunt around the city, mostly at night to capture any victim suspected to be super rich that could cough out a huge sum of money when captured.

“These people are  highly connected, sophisticated and mean. They are youngmen, backed by godfathers somewhere.”

This is one of the revelations by a lucky victim who was released from his captors.

To this end, it is worthy of  note that in the last one week and a half, there were at least about five reported cases of victims  kidnapped in different parts of the state without any trace of the victims or the perpetrators.

The high rate of unemployment among university graduates was said to be one of the reasons why the perpetrators, mostly youths, have resorted to the ‘business’.

However, the  incident that caught the public attention in recent times was the abduction of Chairman of Ejigbo Local Council Development Area,Kehinde Bamigbetan, who was kidnapped by three gunmen on his way back home after an event on Monday, 14th, April, 2013, at about 11pm  on his street, Ona Iwa Mimo, Ori-Oke in Ejigbo.

The sum of $1million ransom, about N158 million was demanded by  his abductors who got in touch with the wife, Mrs. Fatimah Bamigbetan for his release.

The gunmen were said to have released several gun shots into the air to scare away residents. But while trying to escape from the assailants, the driver was later caught up with in a mud that stuck the SUV. Bamigbetan, was then whisked away in their get-away car.

He was later set free on Saturday,20th, April, 2013 into the warm embrace of his family, members of  which  were grateful to God that he returned alive and unharmed.

An earlier victim whose ransom had been received from his family members was reportedly dumped in the middle of Bamigbetan’s operation and he was later handed over to the police for further investigation.

The victim was reportedly kidnapped in a similar operation like Bamigbetan’s by five gunmen when driving home in his white G Class Lexus SUV, with registration number EJ 541 LND.

According to an eyewitness, the victim was just coming out of Baff Club 77, of which he is a member on 1 Close, 21 Road around 10:45 pm after Barcelona Bayern Munich match in the European Championship League encounter.

The whereabouts of the victim is still unknown, as  the family members  are thrown into uncertainty and endless expectation for their breadwinner’s return home.

When contacted, Area E command, Festac Town, denied report of such incident as at press time.

According to other reports, between Sunday 14th and Tuesday 16th April, 2013, about five  persons were allegedly kidnapped in various parts of Lagos, particularly, Yaba, Surulere, Ejigbo and Lekki areas and huge amounts of money were demanded on each person and none had been released as at press time.

Some victims were often blind folded to erase any possible trace that could lead to their arrest of the perpetrators.

With this development, residents now live in fear as nobody knows who may be the next victim.