Before Jose Mourinho, Real Madrid was a team struggling to compete in Europe’s elite competition. The arrival of the ‘special one’ brought succour to the Los Merengues as they’ve witnessed the Champions League semifinal stage three consecutive times in three seasons. Before his arrival in 2010, the Spanish giants had suffered six successive exits at the last- 16 stage.

Mourinho came and re- established Real as a force to be reckoned with on the continent. Ever since, Real Madrid’s push for a record 10th European Cup crown has taken a dramatic turn, but tonight’s clash with Borussia Dortmund could serve as a litmus test for the star- studded Real.
Jurgen Klopp may not be as popular as Mourinho (Jose himself attested to that), but the Borusia Dortmund coach has earned his fair share of accolades. Having led Dortmund to two successive Bundesliga championships success against the odds, the young but ‘authentic’ manager must be reckoned with. 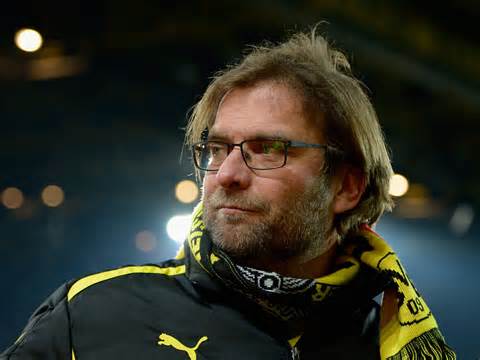 The reputation of the young manager is not in question for Wednesday’s semifinal clash, but the transfer of one of his best players to rivals Bayern Munich is big news.

Jurgen Klopp has had to deal with Mario Gotze’s move to Bayern and he’s determined not to let Real Madrid CF think Dortmund are wounded, urging the home fans: “Let’s make it a special and outstanding night, a real BVB night. Leave all your negative emotions at home and will us to victory against Real Madrid.”
“Everyone should support the team tomorrow, no matter what- Real Madrid cannot capitalize on this. If someone does not understand how much heart has gone into getting this far, they should not come. Those who understand will support the team unconditionally. Our fans have reacted extremely well in extreme situations in the past. I think that will be the case again.”
Klopp was quick to acknowledge Real’s prowess on attack, but thinks the Madrid club have mastered different styles of playing football under Jose Mourinho.

“Real Madrid have different ways of playing. At Manchester (United FC) they had 68% possession, even when it was 11 v 11, so they can play possession game. They are not all about transition play, attacking on the break. Madrid are one of the best teams in the world and capable of playing every style there is. But so can we. Which one we employ tomorrow, you will have to wait and see.”
Mourinho views the 4-3 aggregate loss to Dortmund in the group stage of the same competition as a product of a mistake, while the club bid for a third- time- lucky appearance in the semifinal stage; he believes it would take anything above the extraordinary for Madrid to concede as much goals against an all too familiar Dortmund.
“The four goals we conceded against Dortmund in the group stage were all out mistakes. Should we concede again in these two games, I hope it would be because of fantastic and unstoppable goals, not ones created by our mistakes. But of course we hope not to concede many goals at all!”
Michael Essien is a doubt for Wednesday’s game; the player has been nursing a muscle strain. Fabio Coentrao (muscular problems) and Alvaro Arbeloa (back) were both out of Real’s 3-1 win against Betis at the weekend and may face a late fitness test for tonight’s game. Xabi Alonso will not be available tonight after picking up a yellow card in Istanbul. Angel Di Maria may have to risk the wrath of his nursing wife- who has just given birth- to play. Luka Modric (calf) and Marcelo (thigh) both face a race against time to feature tonight.
However, the availability of Robert Lewandowski serves as a boost for Klopp’s side, after shaking off a thigh knock suffered on Saturday. Sebastian Kehl (foot) and Sven Bender (pelvis) are likely to start after sitting out Dortmunds 2-0 defeat to FSV Mainz.
It took Dortmund fifteen years to get to this stage of the Champions League. Tonight’s game against Madrid is significant going down memory lane, Madrid ended Dortmund’s reign as European champions when the teams met in the 1997/98 semifinals under the tutelage of Jupp Heynckes. Madrid went on to win the trophy. Will this be a repeat of history? Time shall tell.