No fewer than 5,000 people may have been rendered jobless and goods estimated at N2bn destroyed when government officials led by policemen and military personnel pulled down Alakoro Market in Apongbon, Lagos on Monday. 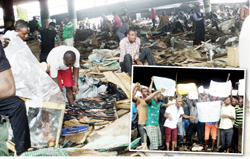 Alakoro is a major market that promotes Nigerian-made products and boasts of patronage from South Africa, Ghana, Mali and others.

It was gathered that some traders, who allegedly tried to stop the security operatives from carrying out the demolition were beaten.

It was also learnt injured traders were taken to a  nearby hospital.

President of the Amalgamated Shoes and Bags Sellers Association, Mr. Wilfred Orjiako, said the market was duly registered and had recently paid for its 2013 land use.

He said the seven-day notice they received to vacate the market was curious.

Orjiako said, “On March 26, 2013 we saw some men from the Federal Ministry of Works and they started pasting posters that we should quit within seven days.

“We went to the controller to report the matter, but we did not see him.

“We further wrote the Area Commander A, Panti Station and the Assistant Inspector General that they should intervene in the matter, but we got no reply

“On Friday we saw policemen and bulldozers coming to pull down our market, but we resisted them, so they left us.

“On Monday, this week, about 200 armed policemen came and started shooting sporadically, wounding some of the people in the market in the process.”

Orjiako said one Dapo Balogun led the group that carried out the order that was allegedly given by the FMW. Some documents made available to our correspondent revealed the market paid an annual licence fee of N257,400 and had recently paid the 2013 dues to the Ministry of Land, Housing and Urban Development.

The association also has a matter in court over the land which is being handled by the Falana and Falana’s Chambers.

PUNCH Metro spoke with some of the traders who were seen picking some of their goods from the rubble.

Okadigbo Austin, a 31-year-old shoe dealer said he saw the demolition as an ethnic issue.

He said, “We can do more than what Henry Okah did. If they eventually succeed in removing us from here, we will do worse. We can wreak havoc, like break this bridge. I will personally carry arms and I know where to get it.”

Balogun Habeeb, an undergraduate of Business Administration of the Lagos City Polytechnic, said he makes shoes which he also sells in the market to raise his tuition.

He said, “I am a student, and this is where I get money to sponsor myself. I make footwear that I sell to people in this market. With this demolition, it is like government wants to ruin my life. Where do they want me to get money to pay for an HND which I am about to do now. This is the next phase of my life and I am just helpless.”

A trader, who identified herself as Iya Bendel, told our correspondent that her husband became hypertensive on hearing the news of demolition.

“This is where I get money to pay my children’s school fees. What do they want me to do now?”she asked.

Another trader, Ganiyat, said she had no idea of the invasion until the security operatives descended heavily on her and pulled down her shops.

She said, “They started beating me up.  I was rolling on the floor and they were hitting me. I have no where to turn to now. And I bought my goods on credit. I lost goods worth N6m.

When contacted, the Police Public Relations Officer, Lagos State Police Command, Ngozi Braide, said she was not aware of the demolition.