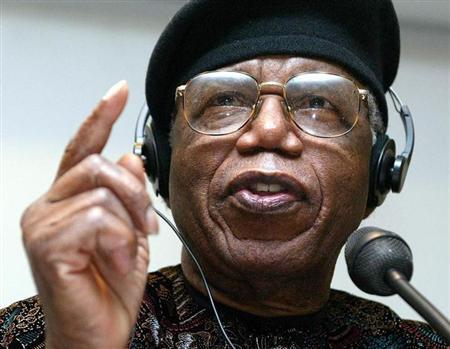 The Senate of the state of New York in United States of America, has passed a resolution in honour of the late literary icon, Professor Chinua Achebe, as well as transmited members’ condolences to his family in Ogidi, Anambra State, Nigeria.

The 696-word resolution numbered J1186-2013, had the House pausing in course of the session to acknowledge Achebe’s landmark achievements in the field of literature.

Its highpoints was the recognition that ‘Achebe is the pioneer and founder of African Literature’.

The resolution reads in part: “It is the sense of this Legislative Body to pay tribute to the lives of those esteemed individuals of international renown who distinguished themselves through their life’s work. Foremost novelist, Professor Chinua Achebe, died on Thursday, March 21, 2013, at the age of 82.

“Born Albert Chinualumogu Achebe, on November 16, 1930, Chinua Achebe was a Nigerian novelist, poet, professor, and critic; he was best known for his 1958 novel, Things Fall Apart, selling over 12 million copies around the world, and having been translated into 50 languages, making him the most paraphrased African writer of all time.

“Raised by his parents in the Igbo town of Ogidi in south-eastern Nigeria, Chinua Achebe excelled academically and earned a scholarship for undergraduate studies; he became fascinated with world religions and traditional African cultures, and began writing stories as a college student.

“Chinua Achebe’s commitment to excellence, and his spirit of humanity, carried over into all fields of enterprise, including charitable and civic endeavours.