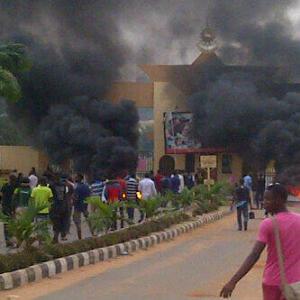 Students of Ladoke Akintola University of Technology (LAUTECH), Ogbomoso, Oyo State, on Monday night and Tuesday went on the rampage, as three of their colleagues were reportedly killed by an alleged drunk okada rider.

According to sources, the deceased; all female, were 200-level undergraduates of the department of Science Laboratory Technology (SLT).

Two of the students were allegedly returning from where they went to get their laboratory coats from one of their lecturers when a taxi reportedly veered off its way to crush them.

In the process, one of the girls, in a frantic bid to escape being hurt, jumped off the bike but unfortunately hit her head on the tarred road. The second girl on the bike and a third victim who was trekking by the road side, died on getting to the hospital.

Three occupants in the taxi, who were also students of the institution, it was learnt, were in coma as at the time of this report.

Irked by thedevelopment which they claimed was the third in two years involving okada riders and students, the students had, since Monday afternoon, commenced riot in the school premises.

They razed down the taxi, made bonfires on the road, destroyed some school property and were alleged to have beaten up the female lecturer in question.

Speaking on the matter, the Public Relations Officer of the institution, Mrs Folashade Ajao-Oyediran, disclosed that they were not allowed into the school, saying the school management was currently meeting over the matter and would make a statement soon.