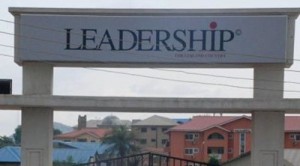 Following rising controversy over the trial of two reporters from the Leadership Newspaper, the Minister of Information, Labaran Maku, has urged Nigerians not to see the current trial as a step by the government to curtail freedom of the press.

In an interview with newsmen shortly after the inauguration of the newly constituted board of the Federal Radio Corporation of Nigeria, FRCN, and Voice of Nigeria, VON, in Abuja, Maku described the trial as a good step in the right direction to enshrine constitutionalism in the country.

“This does not mean that the government is trying to suppress press freedom,” Maku said.

“People should not see it as means to restrain the freedom of the press, this is evidence that democracy is at work, unlike in the dictatorship era, where some journalists were burnt or brutalised.

“The law does not say that, I, Labaran Maku, if I am arrested to answer some questions should not go, I will go. Being a journalist does not mean that we are immune from the law.

“The truth is that there is no law that says you should not be interrogated, the fact still remains that if you are invited and still detain more that the required of the law, you have the right to seek remedial through the law court. There is no law that can suppress the freedom of the press.

“In the past, people were not arrested, they were burnt to death, that was in the days of dictatorship. Now, it’s the law that is inviting you, don’t forget, this is the government of the rule of law. If the law is offended, the law will seek redress.

“You have the liberty under the law if your right is infringed, the fact that a journalist or doctor is being arrested should not be seen as abridged.

“The detainee is still presumed innocent unless you are found guilty, so that freedom is granted by the constitution and nobody can take it.”

The Minister also challenged media practitioners in the country to embark on developmental journalism in the interest of the country, noting that they should not forget that “press freedom comes with some level of responsibility.”

He described the habit of some writers who report negativity about their country as negating the principle of fairness and balance in journalism.

“I call on my colleagues, reporters to do something about our low attitude to development reporting, we can bring down the negative, every country has its negative part.

“I am not saying we should not report it, but on daily basis, you have the negative and completely forget that positive things also happen in the society, you discourage people from doing their best for the country.

“You also even portray our image bad before the world, thereby giving our country a bad name,” the minister noted.

Inaugurating the boards, Maku noted that the board members were carefully selected based on their wealth of experiences.

He therefore charged them to contribute their quota to the well being of the people, promising that they would be given free hands to operate.

“The members of the two boards have been carefully selected to help the agency in management for the good of Nigerians, so bringing them on board will further enhance the programmes and the management of these agencies for greater efficiency in service delivery.

“I, as long as I remain the minister of information, I will give you the liberty range to bring in your ideals and expertise to run this agency, although VON and FRCN are from government fund, they will be sensitive to the issue of the people,” he promised.

Mr Ben Murray Bruce was chosen as the chairman of FRCN Board, while Andy Agbaji is to head the Board of VON.