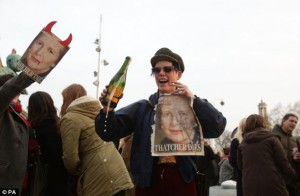 As the world mourn the demise of Margaret Thatcher and world leaders pay tributes, hundreds of people on Monday took to the main square in Brixton, an area of south London which suffered serious rioting in the 1980s, to celebrate the death of former prime minister.

Signs and placards with different inscriptions were seen on the streets. One read;“Rejoice — Thatcher is dead”. Around 200 people gathered in the neighbourhood, a hotspot of alternative culture, and toasted her passing by drinking and dancing to hip-hop and reggae songs blaring from sound systems.

“I’m very, very pleased. She did so much damage to this country,” said one man brandishing an original newspaper billboard from 1990 announcing Thatcher’s resignation.

Others scrawled “Good Riddance” on the pavement.

“We’ve got the bunting out at home,” said Clare Truscott, a woman in her 50s wearing a sparkly beret and holding a homemade sign reading “Ding dong, the witch is dead”.

“I’m from the north, where there were no jobs, where the industry was rapidly disappearing, and her policies ensured it went more quickly.”

Brixton was the scene of fierce riots in 1981, two years after Thatcher became prime minister.

Carole Roper, a woman in her 50s from north London, said: “We’re here to celebrate her death.” 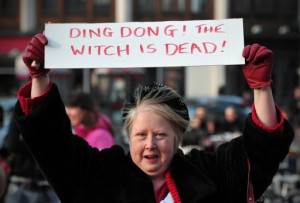 Sipping from a can of beer, she insisted: “I don’t think it’s vindictive — it’s not so much about the death of Thatcher but what she has done, the policies she introduced to this country.

“Compare the coverage to that when Chavez died — she’s being eulogised. It’s been wall to wall coverage on the BBC but she did nothing to help the poor people of this country.”

Meanwhile, in the Scottish city of Glasgow more than 300 people gathered to hold their own impromptu “party”. 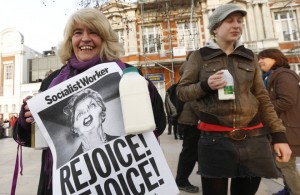 The crowd also broke into a chorus of “So long, the witch is dead” while drinking champagne.

Margaret Thatcher has been described as UK’s best post-war prime minister. She made a lot of policies that made the UK what it is today, but those affected when the policies were made obviously never forgave her.

The “Iron Lady” who dominated a generation of British politics and won international acclaim for helping to end the Cold War died following a stroke on Monday. She was 87.