The Montana man whose dog ate $500 says he’s going to find a better place to stash his cash when he travels. 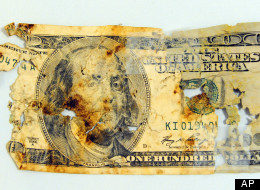 Wayne Klinkel tells the Independent Record he doesn’t carry a wallet on his chiropractor’s advice.

Sundance, his 12-year-old golden retriever, ate the bills during a visit the Klinkels’ daughter in Denver last Christmas. The dog was left alone in the car with five $100 bills and a $1 bill when they stopped for dinner and promptly dined on the $100 bills, but left the dollar.

Klinkel says he collected fragments from the dog’s droppings. His daughter found more when the snow melted.

He says he washed the remnants of the bills and sent them taped together to the Treasury Department in hopes of having them replaced.