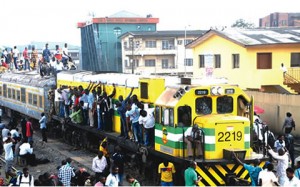 A pregnant woman and one other person were yesterday killed during a clash between policemen and train hikers along the Oshodi/Agege railway line, in Lagos.

The pregnant woman was said to have been hit by a hard object thrown by one of the hikers, while the other person, also with unknown identity, was crushed to death while trying to escape.

Policemen were said to have been stationed around PWD end of the railway line, to arrest of some of the hikers.

The hikers have also reportedly become violent in recent times, as they now haul stones and dangerous objects at individuals who attempt to take their photographs.

Trouble however reportedly started, yesterday, after they (hikers) started hauling stones at policemen on reaching PWD, with a view to escaping arrest.

This caused a stampede as everyone scampered for safety to avoid being hit by dangerous objects.

In the ensuing stampede, the pregnant woman was said to have been hit by a hard object.

According to an eye witness, the woman would have survived if help had come readily. But she was said to have been trampled upon by those scampering to safety.

The second victim, a male, was said to have fallen off the train and was crushed in the process.

In a bid to avoid further casualty, the policemen were said to have fired into the air.

Sources, however, said no fewer than 10 persons were arrested. [Vanguard]