Did Margaret Thatcher play a role in helping to save Nelson Mandela’s life? That is the remarkable claim made by one of the former South African president’s closest friends, Ahmed Kathrada. 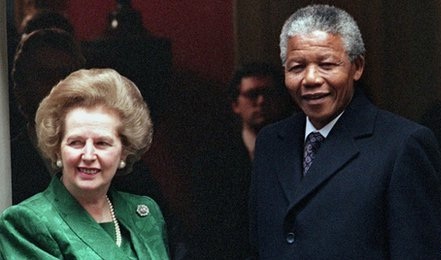 “Her word did count – I’m sure of it,” Mr. Kathrada said on hearing of the death of Baroness Thatcher.

Between 1963 and 1964, Nelson Mandela was a defendant at the Rivonia trial, accused of trying to overthrow the apartheid government.

Mr. Kathrada was one of nine other men in the dock with him. The death penalty was initially sought by prosecutors, but was later changed to life imprisonment.

After the end of apartheid and the advent of democracy in South Africa in 1994, Mr. Kathrada sometimes took visiting delegations and VIPs on guided tours of the notorious Robben Island jail where he and Mr. Mandela had been incarcerated.

“I had the opportunity to accompany [Margaret Thatcher] a few years ago,” said Mr. Kathrada.

“She assured me that she had played a positive role during our trial. We were expecting a death sentence. We were well aware that there was all sorts of pressure from South Africa and abroad – pressure from people not necessarily agreeing with” the ANC’s policies, he said.

At the time, Mrs. Thatcher was a frontbench MP in Harold Macmillan’s government.

“I’m not interested in whether she was prime minister or whatever,” said Mr. Kathrada, when I quizzed him on the likelihood that Baroness Thatcher was personally involved in any behind-the-scenes diplomatic pressure on South Africa’s apartheid government.

“I had no reason to doubt what she was saying and it was good to hear she played a role.”

Baroness Thatcher was better known for her strong opposition to sanctions against the apartheid government, and for describing the African National Congress in 1987 as a “typical terrorist organisation… Anyone who thinks it is going to run the government in South Africa is living in cloud-cuckoo land”.

Mr. Mandela did not meet her on his first visit to London in 1990 after his release, but Mr. Kathrada insisted that no grudge was held.

“We were quite aware [that she’d called us terrorists] but we had forgiven our oppressors, and Mrs. Thatcher wasn’t one of our oppressors,” Mr. Kathrada said.

“Once we’d forgiven our oppressors – the national government and individuals – we didn’t find it difficult to forgive everybody who had different views from us.”