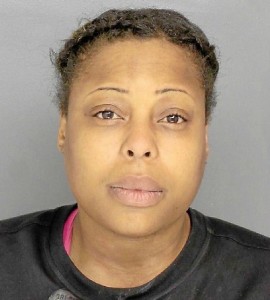 Honey Love (pictured), a mother of three, was arrested Monday night along with her 11-year-old son after she allegedly armed him with two steak knives and instructed him to seek revenge on a teen boy who allegedly assaulted her 12-year-old daughter reports Philly Media.

Her under aged daughter was allegedly alone in her bedroom with a 16-year-old boy who attempted to hug and kiss the young girl. When she refused to give in to his advances, she fell on the floor. The boy then allegedly stood over her and pulled down his pants and underwear. The girl’s brother heard the commotion in his sister’s room and burst in, chasing the teen away.

When Honey Love was informed about what had gone down under her roof, she reportedly enlisted the help of her 11-year-old son, two of her other children and three other people to go over to the teen’s home. According to Upper Darby Police Superintendent Michael Chitwood who spoke to Philly.com, “Mom took the gang and was going to kick some ass, or cut some ass, one or the other,” Chitwood said.

When Love and her posse arrived at the home of the teen boy and the door opened, all seven people walked into his home. The teen was accompanied by his father and two brothers.

According to police, Love’s 11-year-old boy began swinging the two steak knives, one 8-inches and the other, 4-inches. Honey then reportedly took one of her son’s knives and began wielding it as well. She allegedly managed to punch the teen with a closed fist.

Police arrived before anyone was injured.

Love was arraigned on charges of possessing instruments of crime, burglary and criminal trespass, three counts each of simple assault, recklessly endangering another person, terrorist threats and harassment and four counts of endangering the welfare of a child. The 11-year-old son was charged with assault and other related offenses.

The 16-year-old boy was arrested as well and slapped with attempted rape, sexual assault and other charges.

Bail for Love was set at 10 percent of $50,000, pending a preliminary hearing April 15 in district court.