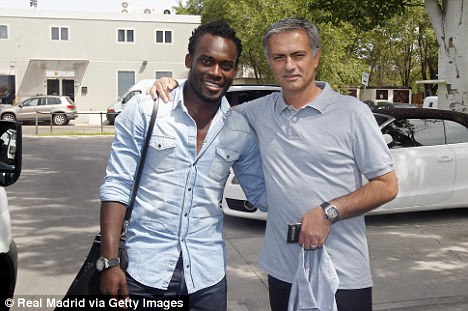 Ghana midfield star Michael Essien could return to Chelsea as it has emerged that the Blues have offered Jose Mourinho a contract to return the English club. Essien, who is on loan at Real Madrid from Chelsea, moved to the Spanish club on the orders of Mourinho, the man he considers as his father.

The Ghanaian player was given the chance by Mourinho to revive his career at Real Madrid after suffering less playing time at Chelsea. Essien was among one of Mourinho’s early signing at Chelsea and with the Ghanaian’s performance at Real Madrid the Portuguese trainer could bring the Ghanaian back to Stamford Bridge.

Mourinho has been offered a three-year contract to take over at Chelsea in the summer. The deal on the table for Mourinho is believed to be worth between €10M and€15M net per year. Mourinho joined Chelsea in 2004 from FC Porto, leading the Blues to two Premier League titles.He left in 2007 after failing to make the desired impact in Europe.