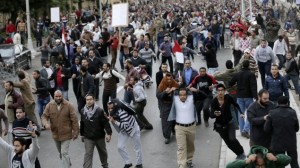 In what is fast becoming the norm in the Egyptian capital, supporters and opponents of the Islamist President Mohammad Mursi clashed again in Cairo on Friday.

Islamists, pushing for reform of the judiciary, and Mursi’s opponents hurled stones at each other in the vicinity of the Supreme Court and Tahrir Square in central Cairo. Gunfire was heard during the fighting that spilled over into nearby streets and the key October 6 Bridge.

Hundreds of Mursi’s Muslim Brotherhood followers and Islamist allies gathered outside the court building, calling for “purge of the judiciary” after a court earlier in the week ordered the release of the deposed president Hosni Mubarak pending a retrial for complicity in protester deaths.

The protesters chanted slogans such as “You bad judges, the revolution continues; Oh president go ahead purge the judiciary and we’ll follow you.”

The secular-leaning opposition who believe Mursi’s government was becoming even worse than Mubarak’s, accuses the ruling Muslim Brotherhood of seeking to tighten its hold on state institutions, including the judiciary. Relations have been tense between judges and Mursi since he took office in July over the Islamist president’s perceived violation of the judicial authority’s independence.