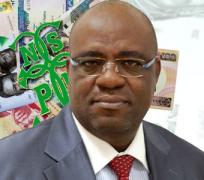 Embattled managing director of the Nigerian Security Printing and Minting Company (NSPMC), Ehi Okomoyon, and two other management staff have tendered their resignations to the board of directors of the company.

The resignation letters which were tendered yesterday is sequel to a Central Bank of Nigeria (CBN) audit which uncovered a scandal in which N2.1 billion worth of N1,000 notes were missing from the minting company.

Also to tender their voluntary resignations were the executive director of operations at the Lagos factory, Desmond Isibor, and the head of security at the same factory, Clement Evarue.

In a meeting that lasted close to three hours and chaired by the CBN governor, Sanusi Lamido Sanusi, the board unanimously accepted their resignation yesterday.

It would be recalled that Okomoyon had since December 2012 been on suspension when the scandal first broke with Ahmed Bamali appointed acting managing director.