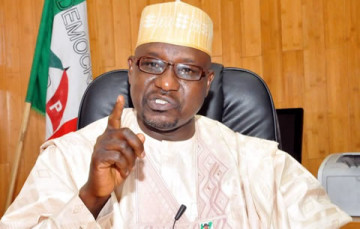 As the Nigerian Governors’ Forum (NGF) meets in Abuja tomorrow, the Presidency has again dismissed reports that it is working behind the scenes to ensure Rivers States Governor, Rotimi Amaechi does not return as chairman of the forum.

Special Adviser to the President on Political Matters, Dr. Ahmed Gulak, said  that the Presidency’s interest was in upholding the rule of law.

According to him, President Goodluck Jonathan, as a loyal member of the PDP, will be delighted to have another PDP governor taking over from Amaechi as the NGF chairman as his tenure comes to an end.

On whether Jonathan would be ready to work with the embattled chairman of the NGF if re-elected, the presidential aide dismissed any talks of re-election saying it was alien to the forum.

Gulak said, “The fact that the President met with the PDP governors was an indication that he is united with the governors. When has it become an aberration for him to meet the governors?

“The President is interested in any PDP governor, not necessarily Shema, taking over from Amaechi at the expiration of his tenure. There is no re-election for Amaechi. His tenure has expired except if he wants to extend his tenure and there is no tenure elongation in the NGF.”