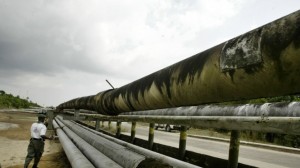 Nigeria lost about N191 billion ($1.23 billion) in the first quarter of 2013, due to drop in crude oil production, arising from incessant crude oil theft and vandalism along the major pipelines within the Niger Delta, the Nigerian National Petroleum Corporation, said yesterday.

The country is also expected to lose N83 billion ($554.0 million) in April and May, as the NNPC and Shell Petroleum Development Company of Nigeria Limited, SPDC, yesterday, declared force majeure on its 150,000 barrels of oil per day Bonny Light export, with the shut down of its $1.1 billion (N174.9 billion) Nembe Creek Trunkline, NCTL due to oil theft.

“Expectedly, this fall between actual production and forecast in first quarter 2013 have resulted in a drop in crude oil revenue of about $1.23 billion (N191 billion) that should have accrued to the Federation Account,” she said.

She explained that the force majeure Bonny Crude declared by SPDC in its Joint Venture with the NNPC is due to incessant crude oil theft.

The shut down, she said, is as a result of investigations which revealed 53 break points along the 97km Nembe Creek Trunkline.

She also disclosed that repair work on the trunkline is expected to last about six weeks, noting that this will further reduce the country’s April and May monthly average to about 2.2mbpd and further decrease crude oil revenue that should have accrued to the Federation Account.

Green, however, assured that the maintenance work will have minimal effect on gas supply to domestic market.

“We shall continue to work with relevant government agencies both at the Federal and State levels to end this incessant crude oil theft and pipeline vandalism. We have the potential to meet the national target of 2.48mbpd if this menace is eliminated.”

SPDC, in a statement signed by Tony Okonedo, Corporate Media Relations Manager, said the shut down is as a result of the incessant incidents of oil theft.

According to him, the company shut down the Nembe Creek Trunkline on Monday, April 15, 2013, to remove crude oil theft connections and investigate suspected oil theft leaks.

Meanwhile, the Coordinating Minister for Economy and Minister of Finance has lamented the spate of oil theft in Nigeria as she says it’s affecting the country a great deal.

Oil should be Nigeria’s saving grace, but oil leakage causes a significant drain on the economy.

Speaking to CNN host Christiane Amanpour on CNN International’s nightly interview program Amanpour, Okonjo-Iweala stressed the need for Nigeria to avoid any leakages or oil theft as the country is still poor.

“We are still a poor country,” she admitted. “We can’t afford any leakage.”