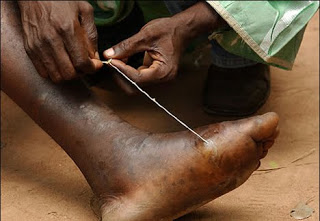 Health authorities have disclosed that guinea worm disease has been eradicated in Nigeria and the country is expected to be certified free of the disease as early as June by World Health Organization (WHO).

“The fact that we have gone from 600,000 cases to zero means there are diseases that can be eradicated,” said Minister of State for Health Muhammad Ali Pate. “And it gives us confidence that polio will be eradicated in Nigeria. The question is when,” he said.

He said eradication efforts, pushed by the National Guinea worm Eradication Programme (NIGEP), focused on surveillance, integrating Guinea worm watch into other immunisation programmes and conscious efforts to improve water and sanitation in the 5,879 affected villages identified by NIGEP in 1998.

A team from WHO is expected to visit around June to kick-start Nigeria’s certification and will confirm whether the country retains a strong surveillance system to ensure any possible case is caught and reported early, said Prof Olukayode Oyediran, head of National Certification Committee on Guinea worm Control, which has monitored local efforts to declare the country certified free of Guinea worm.