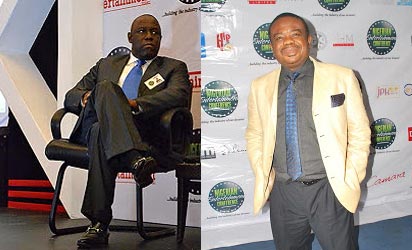 The first ever Nigerian Entertainment Conference held over the weekend at the Grand ball room of the Eko Hotel and suites, Victoria Island, Lagos. The program was almost a disaster thanks to the violent exchange
of words between Kennis Music Boss Mr. Kenny Ogungbe and Chairman of Copyright Society of Nigeria COSON, Chief Tony Okoroji.

The story is that Chief Tony Okoroji had confronted Kenny Ogungbe in the presence of journalists for daring to say in public that COSON owed him
(Kenny Ogungbe) money.

“How could he say such a thing? And in public?” Chief Okorogie shouted.
Kenny Ogungbe didn’t back down, he insisted that he would stand by his words. The two exchanged hot, abusive words and had to be separated by people around.
Kenny Ogungbe went on to say “After now, if anything happens to me, it is on your head”

The incident happened immediately after the first session of the conference where Mr. Kenny Ogungbe had been amongst a panel with Cool DJ Jimmy Jat, Sound Sultan, MI and Weird MC.

After the heated argument, both were too angry to speak further on the testy issue.