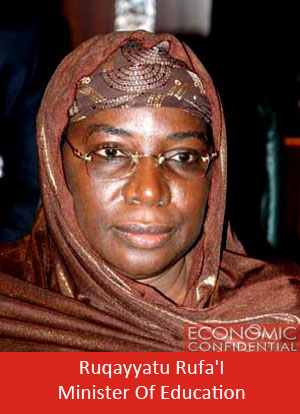 Minister of Education, Professor Ruqayyatu Ahmed Rufa’i yesterday in Abuja said she was yet to be briefed of any moves by Federal Government to scrap the National Examination Council and the Unified Tertiary Matriculations Examinations (UTME) conducted by the Joint Admissions and Matriculation Board (JAMB).

The media was rife with reports that the Steve Oronsaye led Presidential Committee on the Rationalisation and Restructuring of Federal Government Parastatals, Commissions and Agencies had recommended the scraping of NECO and UTME among others.

However, Professor Ruqayyatu who made the comments at a meeting she held with the executives of the Academic Staff Union of Polytechnics (ASUP), said the whitepaper based on the committee’s findings had not yet been officially communicated to her.

Meanwhile, ASUP has issued a 21 day ultimatum to go on warning strike starting March 25 if their demands are not met by Federal Government.