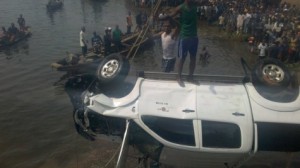 It seemed too early for tragedy, but it did occur in the early hours of Saturday when a Toyota Hilux truck skidded off the highway and plunged into the Majidun River along Ikorodu Road, Lagos.

Confirming the incident, a senior officer of Lagos State Traffic Management Authority, LASTMA, who craved anonymity, said the accident happened at about 6 a.m., which made immediate rescue operation impossible.

Eyewitnesses said the vehicle was on top speed before the driver lost control at the dangerous bend on the road, and the truck plunged into the river.

The bus, with Lagos registration number KSF 918 AU, was recovered around 10.05 a.m. by a combined team of LASTMA officials and local divers, and was taken to Ajegunle Police Station, but the four occupants of the vehicle were still missing.

General Manager of LASEMA, Dr Femi Oke-Osanyintolu also confirmed that four people were in the pick-up truck when it plunged into the Majidun River, but they were yet to be rescued.

The truck was being driven by one Kolawole Ahmed, Gulf Administrative Manager, Ikoyi Club 1938, sources said.

The State Commissioner for Transportation, Kayode Opeifa, who also confirmed the accident, urged motorists to exercise patience and be cautious on the road.