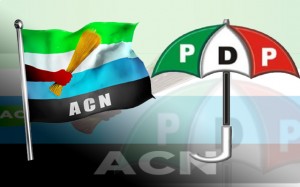 A fight broke out between members of Action Congress of Nigeria, ACN, and Peoples Democratic Party, PDP in Erijiyan Ekiti, Ekiti West Local Government Area of Ekiti State leading to the death of one person while many others sustained injuries.

Reports say during the fight, a man identified as Mr. Ayodele Jeje, a PDP member in the community was killed by suspected ACN thugs.

It was also learnt that the mother of another member of the party in the community, Mr. Segun Adewumi, as well as his younger brother, were also shot, and are now receiving treatment at an undisclosed hospital in the state capital.

In a statement by its state chairman, Mr. Makanjuola Ogundipe, the PDP said that Jeje, Adewumi and others were attacked while finalising arrangement “for a programme where Mr. Segun Adewumi wants to lead over 1,000 members of ACN to PDP.”

Ogundipe in the statement by Mr Femi Omolusi, said “many were injured and cars damaged.”

Sources, meanwhile, said a PDP leader in the state, Senator Clement Awoyelu, was not spared, as his cars were vandalised during the attack.

The Ekiti PDP chairman called on the Inspector General of Police, Mr. Mohammed Abubakar, to intervene and also urged the state Commissioner of Police, Mr. Sotonye Wakama, to bring the perpetrators to book.

ACN however denied that its members attacked PDP members, saying it was rather a clash between members of two factions in PDP in the area.

Chairman of ACN in the state, Chief Jide Awe, who also hails from the town, said ACN had nothing to do with the incident, suggesting that it was a case of groups in the state chapter of PDP attacking each other.

Chief Awe said his party had nothing to do with the clash, claiming that the build up to the crisis had started since Thursday, when some PDP members, who belonged to a former governor’s group clashed with members of another group of the party over a planned rally by the former in the community.

Awe said the community had been tensed since Thursday following the arrival of Chief Bolu Adewumi, who he said was the financier of the group and his younger brother, Mr Segun Adewumi, who also coordinates the affair of the group.

The ACN chairman, who denied that Segun Adewumi was a former member of his party, however, confirmed that Adewumi had once indicated interest to contest for the state House of Assembly election on the platform of ACN in the 2011 general elections, claiming that “he was not allowed to contest based on the fact that he was still a serving civil servant in Lagos State and he had not been working with the ACN in the town.”