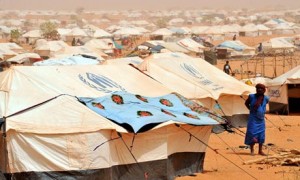 An estimated 74,000 Malians, who have been displaced by fighting in Mali, are in need of urgent help in the desert of Mauritania, the Doctors without Borders (MSF) aid group has said.

In the Mbera camp “humanitarian assistance is insufficient”, the group said in a report, Stranded in the Desert, on Friday.

According to MSF, conditions were so bad that there was only one toilet for every 3,000 people in the camp.

“The wave of the over 15,000 Malian refugees that arrived after the start of the French-led invasion in the camp, really overwhelmed the infrastructure of the camp and that was the point at which we had stories of one latrine for three thousand refugees,” Henry Gray, emergency coordinator for MSF who will be returning to the camp and is ready to face extremely difficult conditions said.

“The situation has improved but we are not at the acceptable standards and perimeters for refugee camps: latrines, water, sheleter and food.

Tuareg fighters had in January 2012 declared the independence of Mali’s entire northern desert region before losing control to other armed groups.

Since that time, more than 270,000 people have been displaced while 170,000 others fled to neighbouring countries, mainly Burkina Faso, Mauritania and Niger, according to the United Nations.

French forces intervened in Mali in mid-January this year to assist the Malian authorities in retaking the lost territory, and pursue their operations in the north.

According to MSF, the displaced at the Mbera camp were also suffering from food insecurity and a lack of basic services, but there was no famine as “rations have improved, food is sufficient now”, said MSF emergency official Marie-Christine Ferir.

Water is however scarce, while temperatures soar to 50 degrees Celsius.

Refugees receive 11 litres of water a day on average, but could use 20 for cooking, drinking and personal hygiene.

Children “should get a ration rich in milk and micronutrients so as to avoid malnutrition”, Ferir who said the death rate among children has soared added.

“They will not move away any time soon for fear of reprisals. That’s what they tell us themselves.”

“They basically are frightened, of potential revenge attacks by the Malian army, or their neighbours of different ethnic origins. And they feel that they have no alternative but to stay in the camp,” MSF’s Henry Gray told Al Jazeera, adding that he expects the situation in the Mbera camp to be a long term one.