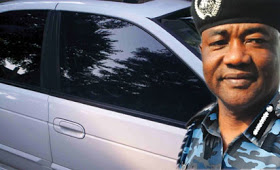 Motorists in the country who have been lamenting their harassment by the police over the use of vehicles with tinted glasses have been accused of insincerity as they knew that “by all standards they do not deserve to have tinted glass vehicles”.

This was the position of the Inspector General of Police (IG), Mr Mohammed Abubakar on Friday while speaking at a meeting with Assistant Inspectors-General of Police in charge of the 12 zonal commands in Nigeria.

He said that the police would enforce the ban as it was meant for the good of all Nigerians.

Abubakar said that to avoid abuse in the granting of the permit, the law only authorised the IG to issue it without delegating such power to commands commissioners of police.

“Do you know that most criminals use it (tinted vehicles) as hideout, to carry arms and ammunition, to carry IEDs, to throw bombs on innocent worshippers in churches and mosques and other places?

“We cannot continue to fold our hands and allow criminality to take place.

“We appeal to Nigerians to understand this, that the essence of doing what we are doing is to ensure that  people are safe and that innocent people are not just unnecessarily attacked,” he said.