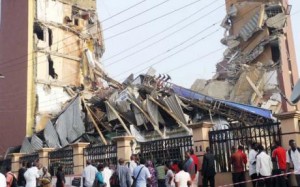 At least four people were at the weekend, feared dead, while three others were injured when a dilapidated building collapsed at Maboreje area of Ikirun, Osun State.

Sources said the collapsed building located close to a private secondary school and mosque was in a bad condition until it eventually collapsed, adding that the residents were relaxing in front of the building in the evening when the house suddenly collapsed.

It was further gathered that only the occupants who had gone to the mosque for the evening prayers escaped the unfortunate incident.

The victims were later rushed to the Ladoke Akintola University of Technology, LAUTECH, Teaching Hospital, Osogbo where four of them were confirmed dead.

Three other victims who were severely injured are still receiving treatment at the hospital, and were said to be responding to treatment.