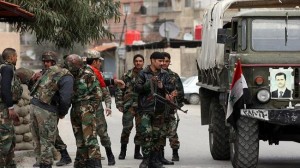 At least 57 people including six children were killed in Southern Syria after the army launched an all-out assault on two towns in Deraa province, a London-based activist group has revealed.

The Syrian Observatory for Human Rights (SOHR) identified the towns on Thursday as Sanamin and Ghabagheb.

“At least six children, seven women, 16 rebel fighters, 16 other unidentified men and 12 army troops were killed on Wednesday, in fighting, shelling and summary executions waged after the army launched an assault on Sanamin and Ghabagheb,” the SOHR said.

According to sources, the reported 45 people killed in Sanamin, roughly 50km south of Damascus, was precipitated by a rash of defections by members of the Syrian army.

A rights group has also said in a related development that Syrian military air strikes have hit four bakeries and two hospitals among other civilian targets and killed thousands of people in raids that it said amounted to war crimes.

“Individuals who commit serious violations of the laws of war wilfully, that is intentionally or recklessly, are responsible for war crimes,” Human Rights Watch (HRW) said on Thursday in a report titled Death from the Skies.

According to the group whose findings are based on investigations in rebel-held areas, one hospital in the northern city of Aleppo, the Dar al-Shifa, suffered at least four attacks alone.

“In village after village, we found a civilian population terrified by their country’s own air force,” Ole Solvang, a Human Rights Watch emergencies researcher, said.

“These illegal air strikes killed and injured many civilians and sowed a path of destruction, fear, and displacement/”

Citing a network of activists, HRW said that “air strikes have killed more than 4,300 civilians across Syria since July 2012.”

The report detailed the use of highly explosive munitions that sometimes flattened several houses in a single attack.

Syrian state television though didn’t name HRW, but said foreign organizations rely only on accounts by opposition activists when reporting about the war in Syria.

One resident of the northern town of Azaz told HRW that at least 12 members of his family were killed in a bombing of their homes on August 15 last year.

“I buried 12 of my family members … including my father, my mother, and my sister; my brother’s wife as well,” said the man identified as Ahmed.

“Walid, my brother, was cut into pieces. We didn’t recognise him at first. We buried my brothers’ children also. The youngest was 40 days old,” he said. One of the explosive devices used in attacks on Azaz was a powerful fragmentation bomb “that has a casualty-producing radius of 155 metres”, said the watchdog.

The organisation has therefore called on the international community to help put a stop to violations in Syria.