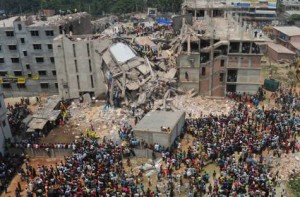 Elite anti-crime Rapid Action Battalion (RAB) of Bangladesh on Sunday arrested the owner of Rana Plaza Sohel Rana from Benapole frontiers with India four days after the eight-story structure which made him a fugitive collapsed, as he tried to flee the country.

“RAB arrested him from Benapole frontiers as he tried to flee the country,” state minister for local government Jahangir Kabir Nanak told newsmen in front of the collapse site.

RAB spokesman Wing Commander Habibur Rahman reconfirmed the report saying a detective team of the elite anti-crime unit arrested him near the Indian borders as he was being hunted to be exposed to justice on charges of involuntary murders.

He said details on the arrest would be briefed at a press conference on Sunday giving details of the arrest of Rana, who officials said erected the building defying safety rules and proper clearance.

The development came three days after Prime Minister Shaikh Hasina ordered arrest of Rana and the owners of the five garments factories housed in the structure as they apparently forced several thousand workers join the production line even after cracks were reported and warnings were issued about their exposure to fatal collapse.

Owners of two garment units and two engineers responsible for buildings safety were arrested and remanded in police custody yesterday on court orders as the death toll continued to rise prompting angry workers to vent their anger taking to the streets.

They said owners of the garment factories which were housed at the Rana Plaza at suburban Savar gave in as advised by the owners association as they were haunted for forcing workers to join the work ignoring warnings about cracks.

Police also said two municipal engineers were arrested because they gave the safety clearance for the building after an inspection five days ago, while a manhunt was underway to track down the building owner, who went into hiding after the structure caved in.

The High Court earlier ordered personal appearance of the building and factory owners on April 30 to explain their role for the tragedy.