The Oyo State Government has concluded arrangement with a vehicle assembly plant from China to commence assembling cars and commercial buses in the state.
The state governor, Senator Abiola Ajimobi disclosed this in Ibadan at the week-end while receiving delegations from two China-based companies in his office.
The visit of the officials of the two companies was the aftermath of an earlier visit to some firms in China by Governor Ajimobi and officials of First Bank Nigeria PLC some weeks ago.

The governor also disclosed that some Chinese companies had agreed to establish their presence in the state in the areas of agriculture, education, silos and tractor manufacturing, e-learning and digitalization of the state-owned Broadcasting Corporation of Oyo State (BCOS).

“In China, we met companies that would build silos for us for storage facilities. We were also able to discuss generally on industrialization and they have decided to bring to us here in Oyo State vehicle assembly plant to assembly passenger cars as well as big and small buses,” he said. 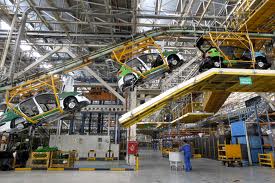 Governor Ajimobi said that his trip to China resulted in the state partnering with seven Chinese companies towards the rapid development of the state.
“Our visit to China was for the development of Oyo State and not for sightseeing; the visit to seven provinces was worth the trouble. It has paid us off as the companies have agreed to help in our development efforts,” he stated.

Earlier in her remarks, the Leader of China Poterio Group, Miss Cheryl Li pledged her company’s readiness to partner with the state government in the areas of e-learning, street lighting, building of silos for storage and digitalization of BCOS.
Also speaking, the Executive Director of First Bank PLC, Mr. Uron Kalu Eke lauded the leadership quality of Governor Ajimobi and his commitment to the development of the state.

“In First Bank, we are excited because we are working with a committed team. Governor Ajimobi, during the trip to China, demonstrated a very keen understanding of economics and I like to commend him for that.
“He (Ajimobi) really means well for the people of Oyo State. It is something we will recommend to other states. We are ready to help Oyo State Government build capacity and the best talent in articulating projects and policies that will have more impact on the lives of the people,” Eke said.