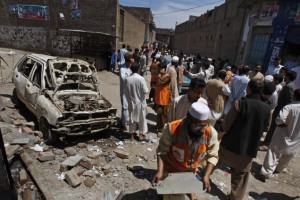 The Taliban has claimed responsibility for two bomb blasts that have killed nine supporters of two Pakistani politicians at their campaign offices in the country’s northwest, the latest violence ahead of general elections next month.

The first attack came after a device exploded outside the office of an independent candidate in the garrison city of Kohat, which is adjacent to Pakistan’s restive tribal areas along the Afghan border at around 05:30GMT.

Ten kilogrammes of explosives were used in the attack, he said.

Violence has marred the campaign for the landmark May 11 general election, with more than 50 people dead in blasts and suicide attacks since April 11, according to an AFP tally, including more than 20 in the past three days.

Five people died and 22 were wounded on Sunday in a blast at the office of an independent candidate in the northwestern garrison city of Kohat, adjacent to Pakistan’s restive tribal areas along the Afghan border.

A blast at the offices of another independent candidate in Peshawar, the main city of the northwest, killed three people and wounded 13, officials said.

Fazal Naeem, a police spokesperson in Kohat, said the blast had damaged shops and vehicles near the office of Noor Akbar Khan and also hit an office of the Awami National Party, which has been threatened by the Taliban.

“The election office was open at the time and supporters of Noor Akbar Khan were sitting inside. The death toll may rise, the condition of some of the injured is critical,” Tanveer Khan, another police official said.

The Pakistani Taliban has targeted the three parties, which are perceived as secular and backed military operations against the ultra-conservatives.

As a result of the threats, there have been few large-scale political rallies leading to a lacklustre campaign for the elections.

Amnesty International has called on Pakistan to investigate the recent wave of attacks and ensure adequate protection for election candidates.