He’s popularly known as Ephy Saint in Nairobi, Kenya where he reigns supreme as a model and thespian of note. 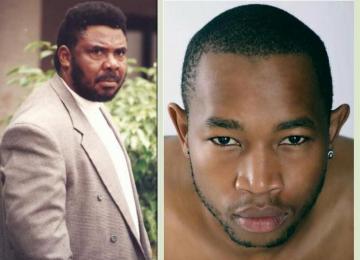 When Nigeriafilms.com, first came out with a bit of the story, so many things happened, Chief Edochie was contacted by Kenyan journalists and he denied, for the fifteenth time, having anything to do with an offspring in Kenya. A call from our office to his line 080920**16* was not picked and even our sms to him was not attended to. In this interview with Alonge Michael of Nigeriafilms.com, this 23 year-old entertainer said he was really bitter that all his effort to meet his father is futile. Please read this interestingly revealing interview.

Tell me a bit about yourself?

I’m 24 years old, raised by an awesome single mother, who I would gladly give an organ to. I am working so hard to live my dream which is to be the best in the world as an actor / model and a movie maker… I love life and have very fun-loving people around me. I always grow to be me and no one else.

How and where did you grow up?

All over, with my mum and my grand folks, in Kenya.

With your mum; how about your father?

Can you tell us why?

I can’t …He is a magician …had me and disappeared, so I can’t tell much about him.

How did you now turn up to be who you are?

I was brought up by two strong-willed women, my mum and my grandmother, discipline being the core of my upbringing. So I turned out alright I guess.

As a child, what did you think of becoming?

A model, reason being that, I have always loved glamour.

How did you attain this status in the modelling world?

Remaining consistent in my craft and patience also came in handy.

Do you have any regret?

No … I believe everything happens for a reason.

What influence does your mum have on you?

She made me love me for who I am and taught me to be real with myself and the people around me. I’m the person I am because of her.

What’s that thing about you that you would want to change?

My financial status… I want to make more money …don’t get me wrong, not that I don’t have money now but I want to have enough money because I have a mother and younger sister to take care of.

Aside Kenya, where would you love to live?

Yes, Nigeria! I learnt he’s a prominent and well known and respected actor in Nigeria from the South Eastern part of the country, as I am made to believe by my mum. That’s the little I know about him.

My mum said so, in fact, he’s still very much an active participant in the industry.

Taking a closer look at yourself, who do you think your dad is?

Well, my mum said and I want to believe her that multiple award-winning actor, Pete Edochie is my biological father.

How sure are you?

I can’t prove it; I only got wind of it last year.

Can you give us reasons why you can’t prove it?

Distance and lack of information from both of them, my mum and him, that is, my biological father, Pete Edochie.

But does your mum realise that you need to know who your true father is?

She does, she kept it away from me until last year when she told me about it. I was shocked.

Have you made effort to reach Pete Edoche after that revelation?

Yes I have, like any other man who might not be in the know about an existing biological child of his; he denied. Saying he has never been to Kenya in his entire life

Through what means did you reach out to him?

My mum sent someone to him and the person return with his message that he said he never had any fling with anybody in Kenya because he has never been there in his entire life.

What was your reaction when he said that?

It’s either he’s lying or he has a twin brother.

This fact you have is not enough to call him your father….

There are talks here and there that he used to live in Nairobi in Kenya in a small town called Buru Buru.

Has it ever occurred to you that your mum might not be factual about this?

I believe my mother. She has always been there for me, I don’t see a reason why she would lie or hide any information about my father or paternity. This is not a matter to be joked with.

So she told you that Pete Edochie, Nigerian bearded actor is your father?

The burden now rests on your shoulders to press further on the paternity issue, since you know your mum is not making a mistake then you should stand as a man to unravel the mystery surrounding your birth.

May be this is how God wants it. In Kenya, I am a big name and I have followership but in God I trust. Thanks for your advice anyway.

What attempt have you made to come to Nigeria and solve this riddle once and for all?

If a man wants nothing to do with me and I believe him to be my father, I also don’t want much to do with him.

Doesn’t your mother have a picture or something she can put down as evidence?

She was having a picture of the two of them together, according to her, she gave it to a friend to help trace him and that friend said he has misplaced the picture. Now you can see the critical situation I have been placed.

From the look of things, I guess only DNA can settle this paternity issue?

If he truly hasn’t been to Kenya as he claimed and I take him through all that, he will hate me the more, so DNA test seems like a long thing right now. I want to believe that everything happens for a reason. I am made to succeed in life. I am not looking for money or anything from Pete, just his acceptance. But of what use is the success for a man to deny the paternity of his child. It’s cruelty and all of us shall meet to account for our various deeds on earth.

Presently where do you live?

I live in Nairobi, Kenya

If there was just one wish you have, what would it be?

I want a complete family.

What surname do you bear?

How? That’s not a Nigerian name as you claim to have a Nigerian father…

Some other man took responsibility of bringing me up but he also left soon after my sister was born, but his mother brought me up that’s why I kept the name. He’s a Kenyan

Did this other guy too divorce your mum or just left like your dad?

Left, my mum was never married to any of them

Modeling or acting; which one pays your bills the most?

They both have taken and given from each other, but modelling pays much better in Kenya.

I would love to be buried in Nigeria, the land of my father.

Thanks for your time?