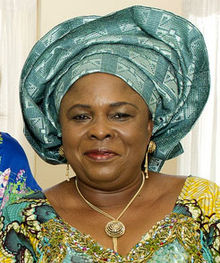 Nigeria’s First lady’s Patience Faka Jonathan, has deteriorated again, becoming so critical that she has been from a proposed official visit to Namibia and South Africa to be embarked upon by her husband, President Goodluck Jonathan.

Sources in Aso Rock said Mr. Jonathan will fly out for the four-day junket to the two Southern African countries on May 5, and return to Abuja on the 10th. Medical sources stated that Mrs. Jonathan remained unwell after returning from Germany about three weeks ago. She had stated that her trip, which started on March 17 from Paris took her through Italy to Germany where she claimed she tendered to her foster mother, “Mama Sisi.”

Since returning from that trip, the First Lady has remained under medical observation at the presidential villa.

Her latest trip to Germany is the third medical trip since her prolonged trip last year where she spent several months in a Wiesbaden hospital, although she denied those details upon her return.

In a thanksgiving service in February, she confessed her travails, including nine surgeries within one month, and declaring she had died but was saved by God.

The presidency has refused to disclose the exact nature of her ailment, but medical sources say she is suffering from a deadly ailment that may be manageable.