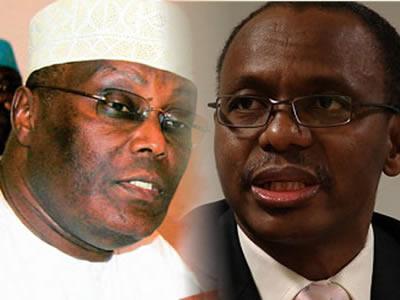 Former Vice President, Atiku Abubakar, has again dismissed the allegations by former FCT Minister – Malam Nasir El-fufai that he approved the management contract with Pentascope (a company Atiku allegedly has vested interests in) for the Nigerian Telecommunications Limited.

He said the allegations are not new. In a statement by his Media Office, Atiku said:

“The interesting thing is that those spreading these allegations couldn’t come forward with any iota of proof against me. I was also accused of selling African Petroleum to myself, using a front. However, when the facts eventually emerged in respect of this particular allegation, my traducers were disarmed and were forced to retreat. Indeed, I was the most investigated public office holder under the former administration and, if this allegation was valid, it could have been conveniently used to bring me down and tarnish my name. Thank God I survived this smear campaign, just like others before it.

“The Senate conducted a public hearing on privatisation under my leadership as the chairman of the National Council on Privatisation. That was the best opportunity for those accusing me of selling public assets to myself to come forward to prove the allegation. Surprisingly, they never did because they relied mainly on hearsay. A cabinet member in Obasanjo’s government, who was promoting this idle rumour, was eventually left looking small because he didn’t have the facts to substantiate his allegations against me.

“On Pentascope, people should direct the questions to El-Rufai himself. The Pentascope scandal was one of the issues investigated by the National Assembly and it accused El-Rufai of ignoring wise counsel by imposing the company on NITEL.”