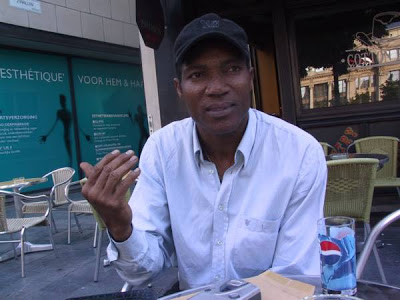 He was in goal for Nigeria’s senior national team for over a decade, and kept goal for European clubs such as K.S.C Lokeren, K.S.K Beveren (both of Belgium) and Deportivo de La Coruna of Spain.

However, one error of judgment on his part has caused the reputation he built over the years to stain, particularly in Belgium where he allegedly diverted the sum of 200,000 euros that was put in his hand by the Nigerian Community and ran to Nigeria last year.

Sources claim that the Belgian government has an arrangement in place for ethnic groups and that of nationals of other countries in Belgium whereby financial supports are given to them every quarter. A subvention, it takes several different forms. At times, it is 5000 euro in a quarter, and at other times it is well above it.

Organizations like the Egbe Omo Odua, Igbo Group, Nigerian Community, Sierra Leon Community, and Ghanaian Community among others get theirs and spend it with shrieks of delight. Most of the African communities also have football clubs that also benefit from the largess.

Impeccable sources told orijoreporter that last year the Nigerian Community Football Club, an outfit managed by the ex-international and in division four of the Belgian League, received 200,000 euro (about N44 million) from the Belgian authority to prosecute the club’s programmes. Others like Ghana, Sierra Leon were also beneficiaries.

But while others used the money as specified that of Nigeria was diverted by the manager, Rufai who left with it to Nigeria since last year and has not returned.

It was said that before the incident Egbon as Rufai is called in Belgium by the Nigerian Community was living in Antwerp having been brought from Spain where he had a small school where goalkeepers were trained by a lady.

Things were so difficult for him following his failure to make the right investments during his impressive career as a footballer. And under the condition he was in, any straw was worth holding on to.

Orijoreporter gathered that Dodo Mayana as he is fondly called in Nigeria risked being jailed for three or six months if he returned to Belgium. It was also said that Rufai’s reported illness last year in Nigeria when he was admitted to Toki Hospital at Surulere for slumping in his office, after his 78 years old mother’s death, was feigned so as to distract attention from his wrongdoing.