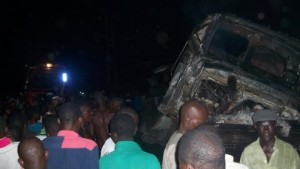 No fewer than fifty houses, a mosque, shops, vehicles and other property worth millions of naira were lost to an inferno Monday evening at Omitowoju and Inalende areas of Mokola, Ibadan, Oyo State.

Witnesses said the fire was caused by a tanker carrying about 33,000 litres of petrol.

“The tanker was taking fuel to the Oando filling station on the narrow road in the residential area. As it was negotiating to turn around St. Stephen Church at Omitowoju junction, it fell and the fuel started pouring on the road and before we knew what was happening, the fire has started consuming the houses,” one of the witnesses Adewale Salami said.

The fire which started burning down houses almost went wild, but it was put out at Okun Abere Street where one of the vehicles of the fire service was stationed. The fire fighters battled to ensure that it did not extend beyond the area.

In the words of another witness, Dada Damilola, “It would have been more than that if not for the promptness of the residents. Everybody trooped out en mass with their buckets full of water which they were pouring on the fire. That was what we were doing before the fire service came.”

The extent of the destruction could not be ascertained yet, according to one of the leaders of the fire service. He said they would be in a better position to give the accurate extent of destruction later.

“As you can see, several things have been destroyed. Houses, cars, shops and other things. We are trying our best to put it off. Immediately we heard of the incident, we drafted our men and vehicles from virtually all our stations including secretariat, Gbagi and Molete. Zartech also assisted us by sending its private truck. Things are under control now. We have combated it. What we are doing now is to put it off completely.”