A major road crash involving a Truck, a Tanker and a Luxury bus occurred at about 1:00 p.m. on Friday, today at Ugboguii Village on the Benin-Ore express road, the Federal Road Safety Corps is reporting. 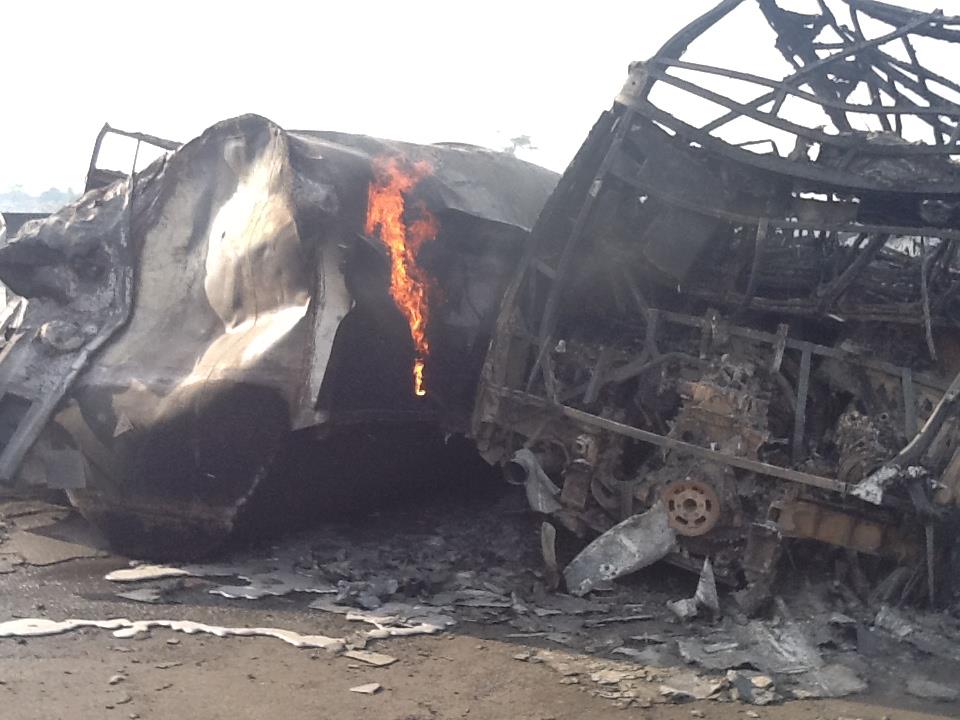 No fewer than 110 people died yesterday in multiple accidents on Benin-Lagos expressway and Onitsha-Owerri expressway. This is coming barely one week after 18 persons perished in an auto crash on Lokoja-Abuja road. In the Benin-Lagos expressway accident, over 80 persons were roasted to death in multiple accidents involving a trailer, tanker, luxury bus and other vehicles, while in the Onitsha-Owerri road accident about 30 people lost their lives when a trailer collided with two mini-buses at Ihiala.

Saturday Sun gathered that among the dead in the Benin-Lagos expressway accident are the driver of the trailer, his assistant and 57 passengers in the luxury bus and occupants of other vehicles affected. Three passengers of the luxury bus, who survived the accident, were badly burnt. According to eyewitness, the accident occurred at Ugbogui, near Ofosu, in Ovia South-West when a cement-laden trailer reportedly had a burst tyre and rammed into a petrol tanker carrying fuel. The fuel tanker had hit a fully loaded luxury bus, which burst into flames.

It was gathered that the spillage of petrol on the road had set other vehicles on fire, including commercial and private cars. About 20 other vehicles were burnt in the process. At the accident scene, there were charred bodies of the passengers in the carcass of the burnt luxury bus and other vehicles. Some passengers in other vehicles, who had got down, were seen shedding tears over the horrible death of the victims. The accident had caused a heavy traffic jam, as personnel of the Federal Road Safety Corps (FRSC) stopped vehicular movement on both sides of the expressway to avoid further disaster.

Confirming the story, an official of FRSC, who pleaded anonymity, explained that the trailer was coming from Lagos, while the tanker and luxury bus were travelling in the opposite direction. FRSC personnel and the police had mounted rescue operation at the scene of the accident. The injured were taken to a nearby hospital, while the road was being cleared to create a thoroughfare for vehicles. Also, firefighters, who later arrived the scene of the accident, battled to put out the fire caused by the explosion of the tanker.

A passenger, who was travelling to Lagos from the East, said they were stuck in traffic for close to four hours because of the accident. “We were in one spot for about four hours. Movement on both sides of the road was stopped by FRSC. We had to make a detour through a bush path, through villages to cross the scene of accident,” he said. In a related development, 30 persons lost their lives, while six others sustained various degrees of injury yesterday, when a trailer collided with two mini-buses at Ihiala, on Onitsha-Owerri expressway.

The two commuter buses, which were said to belong to Rivers State Transport Company, were heading for Onitsha from Port Harcourt when the accident occurred at Ihiala in Anambra State, along the ever-busy Onitsha/Owerri expressway, Anambra State. The trailer, it was gathered, was joining the expressway, after offloading crates of beer when the two buses rammed into it.

Thirty passengers died on the spot, while some others sustained injury. When Saturday Sun visited the scene, the vehicles involved in the accident were lying there, while officials of the Federal Road Safety Corps (FRSC) and policemen were taking the dead to the morgue, while the injured were rushed to nearby hospitals. Commenting on the incident, Chairman of Ihiala branch of Nigeria Bar Association (NBA), Chief Emmanuel Egbunonu, expressed shock at the spate of auto accidents in the area.

He appealed to the Federal Government and the FRSC to help the communities along the expressway. He also advised motorists to always observe speed limits and traffic rules in order to minimise accidents on the road.