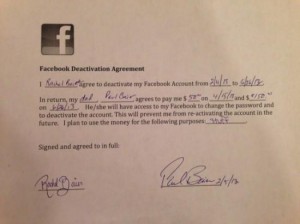 A Boston father and his 14-year-old daughter have recently made the headlines after the man posted a photo of a Facebook Deactivation Agreement that states the girl will receive 200$ if she doesn’t log into her Facebook account for the next five months.

Facebook addiction is one of the most talked-about issues of the moment, and when it comes to teens, the problem is even bigger. But one Boston parent may have found the perfect way to convince his daughter to take a nice long break from the popular social media platform – he’s paying her $200.

The enterprising young girl has managed to strike a deal with her father, Paul Baier, that involves him paying her $50 in April and an extra $150 in June, if she respects her part of the agreement. “It was her idea, which I fully support,” Paul told the Daily Dot. “She wants to earn money and also finds Facebook a distraction and a waste of time sometimes.”

Initially, the girl came up with a payout of $70 in exchange for a much shorter hiatus from Facebook, but her father countered with the $200 for 5 months offer, which she ultimately accepted. The two even drew up and filled out a Facebook Deactivation Agreement to make it official. It states that Baier can take full control of his daughter’s account by changing the password and deactivating it, to make sure she doesn’t sneak a peak online when he’s not paying attention. She will get access back to her Facebook account on June 26, by which time  will have been over.

Paul Baier’s agreement with his young daughter has received mixed reactions. In a comment on his blog, someone goes as far as to call him an “idiot”. ”Why not try something called ‘parenting’. It’s more difficult than bribery but will more beneficial to your daughter in the long run,” the person writes, while another thinks “999 to 1 odds she already has an alternate account and probably more risqué accounts on other sites if she’s already showing this kind of ‘guy will pay me’ mentality. At the same time another reader thinks it’s a “great idea. I just read an online story about it. Perhaps, this will inspire other parents to do the same.”

One thing is for sure, Paul’s daughter isn’t the only one who plans to cut down on Facebook time. A recent study shows one in four US users plan to reduce their time spent on the popular social site this year.