After bouncing into the world’s consciousness with coordinated demonstrations last month, the ladies of Femen have gatecrashed a lecture on blasphemy. 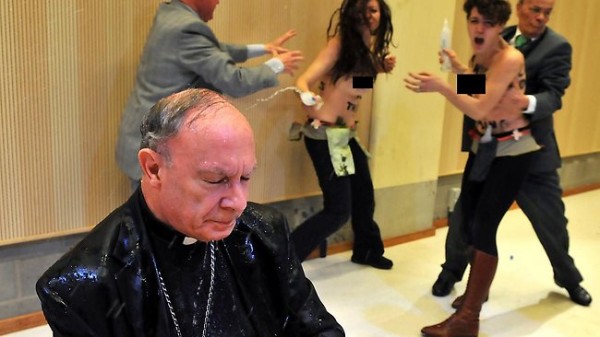 Archbishop Andre-Joseph Leonard was drenched in water after members of women’s rights movement Femen protested against homophobia in the Catholic church.

Leonard was caught by surprise when the women rushed in, wearing just jeans and boots and no shirts

Shouting slogans against homophobia and accusing the church of hypocrisy the protesters were quickly removed from the room.

Not before giving the Leonard a good dousing with water from their water bottles.

The feminist protest group based in Kiev has made headlines recently when they called for a worldwide day of topless protesting on behalf of a Tunisian blogger.