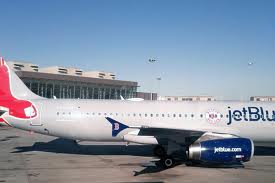 A Maryland man with Tourette syndrome was barred from a JetBlue flight after repeatedly saying “bomb” during the check-in process.

Michael Doyle, 19, of Rockville, Md., had been scheduled to fly Thursday with a friend from Reagan National Airport outside Washington to San Juan, Puerto Rico, for a Revolutionary War re-enactment.

He told WTTG-TV that he brought paperwork documenting his illness in case he said anything to prompt a security concern. Tourette syndrome is a neurological disorder that can cause uncontrolled speech.

He estimated he said “bomb” as many as 100 times. He said he had the Boston Marathon bombings on his mind, as he became more nervous, the problem worsened.

The Transportation Security Administration let him board, but a JetBlue pilot kicked him off the plane before departure. The New York-based airline issued a statement saying the pilot initially had a security concern but later determined the situation was “innocuous” and offered Doyle a spot on the next flight.

Doyle said he was offered a free round trip ticket on another JetBlue flight but no guarantee that he would be allowed to fly.